It is about freaking time, eh?

For over a year now, I have been guest brewing at various breweries around the country. I have helped collaborate on two different recipes and brewed beer commercially for events — but oddly enough, I’ve never actually homebrewed. What can I say? I’m an overachiever.

People have always questioned my decision not to homebrew in the past. This is because I’ve always been missing a *key* part to the homebrewing process. Knowledge — check. Brewing skills — check. Interest — check. Home — oooooh, about that. Since August of 2008, I have lived in eleven — yes kids, I said eleven — different residences. Some were only a few week stints until I got on my feet, others lasted a few months. Most of my earthly possessions never even left boxes. My career path and work experience was as equally unstable and spontaneous. Needless to say, without really knowing where I would be at any date or time and having no real vision of the future, I never had enough stability to start a homebrewing operation.

Although still very much painfully unemployed, I have finally found myself in a place that I can truly call home. And that place? Napa, CA — home to one of the best food & beverage cultures in the world. But it is more than wine and food that makes Napa feel at home. It is the people. I know that the Sonoma folks will try to fight me on this, but there is something here in Napa that lacks on the Sonoma side. I can’t quite put my finger on it, and it definitely is not evident on the surface — but Napa has a deeper layer to it that most people do not know about.

But that is neither here nor there, since I’m sure you could care less about my recent love affair with Napa, let us move on to the real purpose of this post. Not only did I start homebrewing, but I also started a homebrew club. As of now, we are calling it the Napa Homebrew Project — because that is precisely what it is. However, we are not exclusive to Napa — anyone and everyone is welcome to join.

I must be clear from the beginning, we are NOT the first homebrew organization in Napa. And I am not trying to form a separate elitist organizations from the existing clubs. I just have a different vision and different goals for my homebrewing operations. That, and I want to force my friends and roommates to learn more about beer.

There are lots of exciting plans for this homebrew club, which will all be revealed in time. 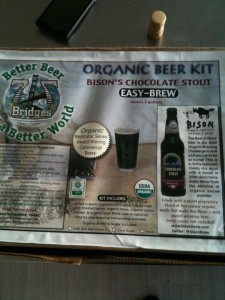 Pardon my ADHD. Let’s get back on track. Last week, we brewed the inaugural beer of the Napa Homebrew Club. In the true overachiever nature of The Wench, I enlisted the help of brewing veteran and brewmaster/founder/owner of Bison Organic Beer, Daniel Del Grande. He was kind enough to provide us with a kit to brew his Organic Chocolate Stout as well as fresh yeast — big plus. He also provided guidance and education for all involved in the operation — which included my roommates (at various stages), my good friend (the Vice President of the club) Jill Dever, Daniel (official CFO of the club) and myself (the President and Director of Awesomeness).

Not gonna lie, and this is NOT snobbery by any means, but homebrewing was pretty easy and fairly lax in comparison to commercial brewing. Now, we didn’t exactly take the “easy” route and brew strictly with extracts.

Go big or home. That should be the motto of our club. 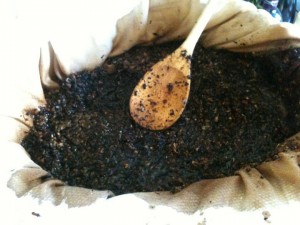 For our first batch, we did a partial grain mash. Aka, we used both malt extract and grains. Although we used a very basic homebrewing system, I still was able to get the “gist” of the process. Mashing in = steeping grain in water (that had been brought up to boiling temperature). Sparging = Pouring the steeped grain through cheese cloth into the boiling pot of water + malt extract and then adding hot water occasionally to get all the sugar in the pot. The boil was essentially what a boil is — we added hops and cacao at this stage. The transfer/ heat exchanger stage was done by pouring the wort onto filtered ice in a bucket. Once the ice was completely melted and the beer cooled down, it was transferred through a funnel into the carboy with the yeast. 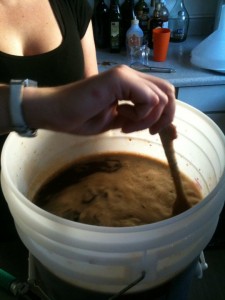 And I am proud to announce the the beer took to fermentation immediately. It is currently bubbling away underneath my kitchen table — almost ready for racking, kegging and then a week or fermentation in the keg.

Oh, but there is one thing I forgot to mention. I look a little less than a gallon of the wort and put it into a separate super professional fermenting vessel — okay, an old apple juice jug. And what I did next… might horrify you. Actually, no. It will most likely excite the uber beer geeks inside.

At first, I wanted to pour the bacon grease leftover from brunch into the wort. But, that would have been disastrous seeing as how many people have been struggling with how to get actual bacon into beer without killing the carbonation with the fat. The inspirational moment came from Russian River Brewing Company’s Sanctification — a 100% brettanoymces beer. You see, I have an obsession with wild yeast… and brett in particular. In fact, I wrote about said obsession a few years back. And it has only intensified since then. Every time I talk about collaborating on a commerical beer recipe, the first thing that comes out of my mouth is brett. Call it word vomit. I am in love, and his name is Brett. I can only imagine a personified version of Brett, looking all James Bond0esque, saying “The name is Brett. Brett–Anomyces.” 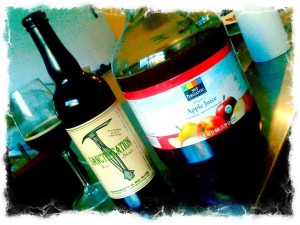 Enough with that. I dumped the bottle conditioned yeast from the bottle of Sanctification into the apple juice jug. The fermentation didn’t take right away. In fact, it didn’t take for a week or more. Then … one day… the bubbles started and the beer became … ALIVE…. ahhhh, it’s alive. 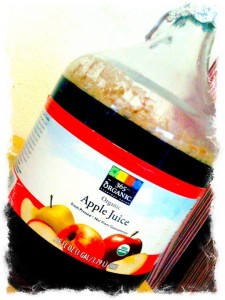 Super stoked about this new project that I’ve created. Speaking of project, I think I’ve just re-branded the name to “The Napa Homebrew Project”! Works for me.