AUTHOR OF: BEER AND JOE

Name of blog: Beer and Joe

2.       What sports if any did you play growing up, through college and beyond?

Football in high school till my knees went bad. No big loss, I played left bench

4.       If you can recall, what is the story of your first beer? Where did you have it? What style and brand was it?

A few buddies of mine all slept over at my friend Brian’s house. I forget who but someone brought enough beers so we each at one. Pretty sure it was Labatt Blue. After one we all thought we were tripping haha

5.        Where, if applicable, did you go to college? What did you study? What additional activities, organizations, sports did you partake in during college?

I went to the Art Institute in Philadelphia PA. It was an art school so no sports or anything like that, our schools mascot was a pretzel. I didn’t really like beer in High School but when I went to college I was too embarrassed at parties to turn it down so I forced myself to drink it, eventually growing to like it. The rest is history.

1.        What was your first craft beer epiphany? Recall as many details about it as you can:

I didn’t venture too far outside of Coors Light and Labatt until after I graduated from college. In fact for most of college my buddies and I would usually knock back a couple of St. Ideas 40’s to get going. But after I graduated and started working I found a local bar near my office that some co-workers and I would frequent. I tried a Sam Adams Oktoberfest there one day based on a buddy’s recommendation and the rest as they say is history. From then on I tried every beer I could get my hands on.

2.       Have you have additional craft beer epiphanies since the first? Detail as many of them as you wish:

Once I started getting into Dogfish Head’s beers it really showed me how different beer can be. They put out so many interesting beers and try some really out there stuff, it’s pretty impressive and is pretty inspirational to my homebrewing.

Little over two years now, although a few months back my buddy who hosts my site switched providers and I lost over a years worth of work. Back up everything people!

I had done a couple blogs with a good friend of mine before, usually about just random stupid crap that was on my mind. People seamed to find it pretty funny and my wife though I should write about beer. She’s usually right about things.

My names Joe and I like beer. Seemed kind of obvious and apparently I’m not very creative.

4.       What are you personal goals for your blog? What do you hope to achieve with it?

If there’s one thing I’ve been annoyed about in the craft beer community it’s how series some people can take things. Beer geek not snob, and I hate when people talk down to someone else for their beer choices. I don’t care if someone wants to drink a Bud, whatever makes them happy but it would be great if I could open them up to something different. I want my blog to be fun and not too serious. I don’t know nearly as much about beer as a lot of other people so I’d rather just make someone laugh at my review.

5.        What is one of the coolest things that happened to you as a result of being a beer blogger?

Any time I get a note from the brewery I write about I think it’s pretty awesome. Climax brewing in NJ emailed me a while back, those guys put out some great beer.

IPA, Stout and Brown Ale. But I really like everything

Dogfish Head, Flying Dog and Southern Tier but really there’s too many to name

Dogfish Head for sure. There have been many times I’ve looked on their site for job openings and told my wife we’re moving. She’s always been supportive of m life for beer and knows how much it would mean to me so she’s up for the move. Sam if you’re reading this Email me!

4.       Are you a homebrewer? If yes, what is the most unique and interesting beer recipes you’ve brewed as a homebrewer?

I am. I don’t get to do it as much as I’d like to but over the years I’ve made some beers I’ve been pretty proud of. Just this past summer I made a mango Wheat which I think was the best I’ve made to date. I also found out that I have a sever allergy to mango peels after peeling 10 pounds worth. For those of you who don’t know mango peels are actually pretty similar to posy ivy. I found out the hard way, learn from my mistakes!

5.        Do you have any beer certifications (BJCP, Cicerone, Siebel, American Brewers Guild)?? If so, what are they?

About 5 years back I decided I wanted to get out of the field I was in so I got my bartenders license. I’ve only bartended once but thinking about becoming a bartender at least once a day, usually at work.

That’s a hard one to answer. I like a good stout with dessert. Really any time my wife and I go out to eat and I find a good beer selection I get excited.

I’m a studio manager for a consulting firm

2.       If you could change your career at this very moment, without any restrictions on what you could do, what would you want to do and why?

Either own a brewery or beer bar. Someday…

4.       Outside of beer and writing, what are some of your other hobbies?

I run, or at least when I can, did this last years NYC marathon. I watch a lot of horror movies which got me involved with writing for Bloody Good Horror, http://www.bloodygoodhorror.com. I also sit in on their podcast every week. 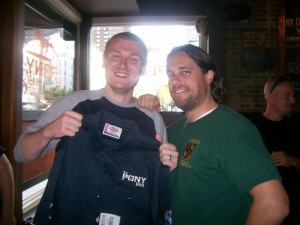 Now we’re getting deep. A stout maybe? Because people think it’s heavy but is really very drinkable. I’m not sure what that means exactly but people usually avoid sitting next to me on the bus, my wife says I always look angry but I’m a really nice guy.

2.       You were caught smuggling beer illegally, which has now been made punishable by death. Right before you are sent to the executioner, you are offered one last beer. What beer would you chose and why?

Anchor Steam’s Christmas Ale. Not because it’s my favorite beer but become it comes in a magnum bottle and I’m going to want to take as much time as possible drinking it.

3.       If I contracted you to brew a beer (or design a beer recipe) called “The Beer Wench” — what style would you chose and what, if any, extra ingredients would you add?

I’m not sure I’d want the pressure of having to save people so I’d really just like the power to sleep in, I can’t remember the last time I’ve slept past 9.

5.       What is one of the craziest things you have ever done and lived to tell the story?

I don’t know if it’s crazy but running the NYC marathon this past November was pretty nuts. It’s probably the hardest thing I’ve ever done and I’m really proud of my accomplishment. I wrote about my training on my site and issued a public challenge to Alanis Morissette, she never responded but I’m pretty sure she was reading.

Love bacon, and not in the hip way everyone loves bacon now. When I was a kid my parents would make me a pound of bacon every Sunday for breakfast because I loved it so much. Yeah I know that sounds awful but it was great and I’m a better person because of it today. I love bacon, I’d like to take it away on a romantic getaway.

BIG THANKS TO JOE (WHOSE LAST NAME SHALL REMAIN NAMELESS) FOR AN AWESOME INTERVIEW!

One thought on “Featured Beer Blogger: BEER AND JOE”