In the eyes of The Wench, Odell can do no wrong. Every beer of theirs that I have had, whether it be from the normal lineup or the reserve collection, has been solid, if not spectacular.

Unfortunately for me, Odell does not distribute in California. So unless I orchestrate some sort of bribe/trade … I will probably never see this beer. Which makes Wenchie a sad pupppy. If anyone wants to trade me for a bottle, shoot me an email. Otherwise, I look forward to hearing feedback from all those who get to taste this rather peculiar creation.

Here is the official press release: 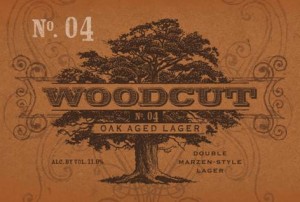 Fort Collins, Colo. – On May 17, 2010, Odell Brewing will release Woodcut No. 4, an oak aged double Märzen-style lager. This is the fourth release in the Woodcut series of beers from Odell Brewing, but it is the first lager.

“Our first three Woodcut offerings were fermented with ale yeasts,” said Brendan McGivney, head of production. “We wanted to stretch our innovation by creating a small batch strong lager.”

Originally from Bavaria, Märzens were brewed during the cooler months, and then stored in a lager (cave or cellar) during the summer months. Woodcut No. 4, best described as a double Märzenbier, boasts a malty body with a clean, refined finish. Hints of toasted cedar, vanilla and almond are created by lagering the beer in new American Oak barrels.

Each Woodcut offering is packaged and bottle conditioned in 750ml Champagne style bottles with a cork and cage finish. Once released, the recipe and label are retired making these beers truly limited-edition.

Odell Brewing will celebrate the release of Woodcut No. 4 on May 22, 2010 as one of many weeklong events honoring American Craft Beer Week. Brewery guests can enjoy samples of the beer paired with artisan cheeses and chocolates.

Woodcut No. 4 will be available throughout the brewery’s nine state distributor region, and will retail for approximately $24.99 per bottle.