Home » About The Beer Wench » EDUCATION » Session #44: The Frankenstein Beers of BrewDog

WELCOME TO THE SESSION — the brain child of beer blogging veterans Stan Hieronymus of Appellation Beer and Jay Brooks of Brookston Bulletin. On the first Friday of each month, all participating bloggers write about a predetermined topic. Each month a different blogger is selected to host The Session. The blogger gets to choose the topic (provided it has not already been covered). The day after The Session is over, the blogger is then “required” (I say this loosely) to post a roundup of all the responses received. For more info on The Session, check out the archive page.

Today’s theme was chosen by … yours truly! Session #44 = FRANKENSTEIN BEERS!

Some brewers have pushed the limits so far that they have become modern day Dr. Frankensteins — crafting mutated monster beers. 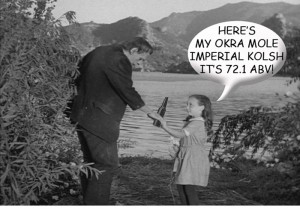 Dr. Frankenstein was obsessed with natural philosophy and chemistry. He set on a mission to defy the laws of nature. His scientific creation was unlike anything the world had ever seen before. It was not a man, but a monster, constructed of human parts and various other inanimate objects.

One brewery, in particular, stands out above the rest as the brewing equivalent Dr. Frankenstein.

Over the past year or so, the Dr. Jekyl and Mr. Hyde brewing duo from BrewDog, James Watt and Martin Dickie, have unleashed mad chaos and massive confusion on the craft beer industry with some of the most extreme beers known to man — if we can even call them beers.

Brewdog’s monstrous, freak-of-nature beers beg the question… Is this science or is this witchcraft? 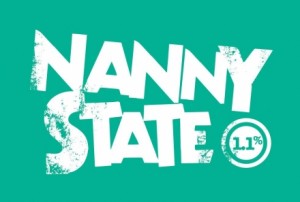 My first run in with BrewDog’s Frankenstein-esque beers was Nanny State — a 1.1% ABV beer with a theoretical IBU of 225. Orginally brewed as an out-lash against the government, Nanny State was BrewDog’s odd attempt at creating the world’s first Imperial Mild. Technically, it is below the legal classification of beer.

How does one even begin to describe this beverage? Nanny State has a nose of pure hops — very floral with intense notes of pine and citrus. The nose does nothing to prepare you for the palate onslaught of its flavor. But then, I’m not even sure the beer has any flavor since one sip of it completely destroys the ability to taste anything. It was by far the most bitter thing that I have ever put on my tongue. Drinking Nanny State felt like I was licking the pine sap off of a pine tree.

Nanny State left my tongue completely numb for a good 15 minutes. And it took my taste-buds a good hour to fully recover from the hop attack.

Brewdog followed Nanny State with the release of a polar opposite Frankenstein-esque beer called Tactical Nuclear Penguin — an insane imperial stout with an ABV of 32% ABV, which was achieved through repetitious freezing and re-fermentation with mutinous yeast strands.

My reaction? Take a wad of peet, some dirt, a bunch of liquid smoke and a bottle of vodka. Blend. Filter out the dirt. And there you have it. Tactical Nuclear Penguin.

But in all seriousness, the beer was actually not that bad. I happen to be a huge fan of scotch and TNP had many characteristics that reminded me of scotch. A small shot of the beer, goes a long way, though. I doubt I would ever be able to finish an entire bottle

Interesting enough, the beer does mellow out and become more drinkable with age.

The Germans were not about to let BrewDog claim the highest alcohol beer crown. They retaliated with a 40% ABV. Not one to step down to a challenge, BrewDog recaptured the title with its 41% ABV Sink The Bismark.

Sink The Bismark has one of the best noses, ever. The aroma hits you like a hop explosion — in your face citrus, pine, resin, grass. At 41%, the beer drinks like a spirit — and it warms the esophagus like a spirit. The extreme alcohol level and boisterous malt bill help to balance out the intense bitterness from the hops.

Surprisingly so, I liked this beer a lot. However, as with anything that teeters around 80 proof, I don’t think I could handle more than a few “shots” of this beer. Interestingly enough, though, Sink The Bismark worked nicely as a “spiking agent” and a shot of it took BrewDog’s regular IPA to the next level. 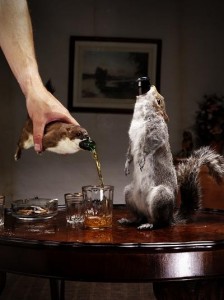 As if 41% wasn’t extreme enough, BrewDog released what they are deeming as the last of its extreme alcohol beer series, aptly named End of History. Clocking in at a boisterous 55% ABV, The End of History is the Frankenstein beer of all Frankenstein beers. It is an Imperial Blond Belgian ale, infused with nettles from the Scottish Highlands and fresh juniper berries. Each bottle of the beer is stuffed into the carcass of a dead woodland creature (that has been taxidermified).

According to BrewDog: “The name derives from the famous work of philosopher Francis Fukuyama, this is to beer what democracy is to history. Fukuyama defined history as the evolution of the political system and traced this through the ages until we got the Western Democratic paradigm. For Fukuyama this was the end point of man’s political evolution and consequently the end of history. The beer is the last high abv beer we are going to brew, the end point of our research into how far the can push the boundaries of extreme brewing, the end of beer.”

Only 12 bottles have been made — and it has been completely sold out. As fate would have it, BrewDog released one bottle (and one bottle only) to be sampled by members of the press. The lucky recipients were my good friends over at BeerTapTV. I’m extremely honored to say that on November 5th, I have been offered the opportunity to taste this freak-of-nature beer during a live steaming of BeerTapTV at the Beer Bloggers Conference! Make sure to tune in and watch the debauchery go down. 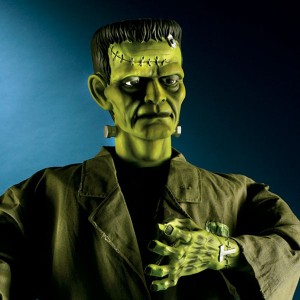 Well folks, there you have it. I have dedicated my Session #44 Frankenstein Beer post to none other than the freak-show circus act known as BrewDog. Cheers!

3 thoughts on “Session #44: The Frankenstein Beers of BrewDog”