(Without even knowing, this post was released on an serendipitous day. Today is Mixology Monday,  hosted by Fred at Cocktail Virgin Slut —and the theme is Beer Cocktails! Although, I did not plan the blog post accordingly, I have no qualms with participating in it! CHEERS! )

Although still extremely niche and relatively new, the “beer cocktail” is a developing trend in both mixology and craft beer. Essentially, a beer cocktail is exactly what it sounds like: a cocktail that uses beer as an ingredient.

Many craft breweries are also dabbling in spirits production. Dogfish Head, Rogue, New Holland, Ballast Point and Anchor Steam all have micro-distilleries within the brewery walls. In my opinion, Sebbie Buhler from Rogue has emerged as the leader of the “beer cocktail” movement in the craft beer industry, introducing the concept of adding craft spirits to craft beers, creating new flavors combinations by mixing Rogue spirits with various craft beers. 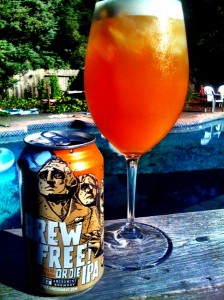 As an amateur mixologist and a craft beer connoisseur, the “beer cocktail” trend really excites me. This weekend, the creativity bug bit me and decided to start mixing my own concoctions. And I’m not going to lie, this beverage was good. I mean REAL good.

I love tequila, especially wood-aged tequila (reposado & anejo). When mixing, I almost always choose reposado. It has more depth in flavor than the blanco, but it isn’t as intense as anejo, which is typically sipped on its own, not mixed (unless of course, you are a baller).

My perfect margarita is simple: tequila + fresh or pure lime + agave nectar. Sometimes, I might add orange liquor or fruit for added sweetness, but the basics always stay the same.

My cocktail was inspired by the “Hoparita” invented by New Holland Brewing Company. They have a spirit called Hopquila, which is essentially a white whiskey that gets steeped with Centennial hops. The hops give the spirit a uniquely bitter and resin like quality, which mimics similar flavors found in tequila. After tasting that cocktail, I knew that hops and tequila made a perfect match. And since I can’t get Hopquila in my market, I set on a mission to recreate the flavor profile of the Hoparita.

The result was ab.so.fucking.lute.ly. amazing. I used 21st Amendment’s Brew Free or Die IPA this time around, and I found that the extra citrus-like resiny hop quality of a West Coast IPA was really ideal for the recipe. So, without further ado, here is my recipe: 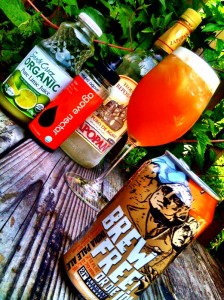 1. In a cocktail shaker, shake ice, tequila, lime juice and agave syrup until the ice is broken up and all the ingredients are well mixed.

2. Pour shaker contents into a glass. Top with 6 ounces of IPA. Give it a quick stir. And enjoy. 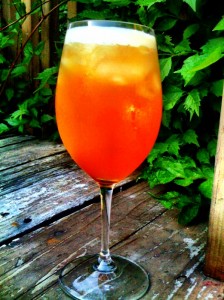 (Note: This would be a PERFECT cocktail to drink on International #IPADay!)