DRINK WITH THE WENCH PRESENTS THE FEATURED BEER PAIRING SERIES

Back in the day, it used to be my job to pair wine with food. Now, after several years in the beer industry, my palate has been trained to understand food and beer pairings. And so, I have decided to take a stab at developing a “Featured Beer Pairing” series on my site, providing beer pairing suggestions and recipes for some of my favorite dishes and then educating people on the “method in my madness.”

Style Description: The Imperial Stout, also known as the Russian Imperial Stout or Imperial Russian Stout, a high-gravity style brewed a complex grain bill consisting of large quantities of roasted malts and/or grain. Typical alcohol ranges from 8-12%, but many brewers these days have pushed it to levels as high as 18% abv. No hop varietals are typical of the style, and they vary with each brewer. The beer is usually fermented with either American or English ale yeast. 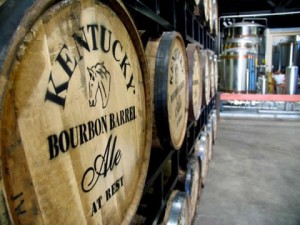 The fully fermented beer is added to (typically) washed Bourbon barrels to age for several weeks, months, or even as long as a year. The finished product usually bumps up a few percentages in alcohol due to the porous nature of the wood which results in evaporation and absorption of residual Bourbon.

The end result is a rich, deep, complex and vicious beer with intense roasted malt, espresso, dark chocolate, vanilla, oak, char and Bourbon flavors and noticeable alcohol burn. The alcohol and intensity tends to mellow with age, and older version of the style develop port-like characteristics as a result of aging. These beers have potential to age as long as 20 years, when properly stored.

Why the pairing works:

Anyone who says that beer is not for breakfast needs a little smack in the face. Besides, breakfast foods are not just for the morning. I, for one, enjoy them all hours of the day.

Some have tried to argue with me that Bourbon-Aged Imperial Stouts are too intense and alcoholic for breakfast, which is just plain silly. I like my breakfast beers just like I like my coffee — super strong, rich and roasty with just the right “jolt” to get the body going. 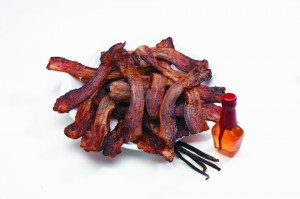 Since the flavors in a Bourbon-Aged Imperial Stout are so bold and intense, the food pairing needs to be equally rich and complex. The doughy and thick, yet fluffy nature of pancakes make it an excellent “blank” canvass.

The semi-sweet chocolate chips (60% cacao or higher) compliments the chocolate, coffee and roasted malt flavors in the beer. Using real vanilla bean in the pancakes and Bourbon in the maple syrup brings out the Bourbon characteristics of the beer, while the smokiness of the bacon enhances the flavor of the char from the oak. Texture wise the dish and the beer are complimentary, both thick and heavy on the tongue. The salt from the bacon and the bitterness from the beer balances out the sweetness of the syrup and the viciousness of the alcohol, resulting in a well-balanced, yet explosive pairing.