Looks like Dogfish Head Brewery is not the only one conspiring with archeologists to recreate ancient beer recipes. Great Lakes Brewing Company out of Cleveland, OH recently announced its latest project, spearheaded by co-owner Pat Conway. They intend to recreate the very first beer that man ever made.

In order to brew a historically accurate version of what is believed to be the first recorded beer recipe from ancient Sumeria, Great Lakes Brewing Company enlisted the help of historians, scientists, and archaeologists. And the authenticity doesn’t stop at just the recipe. GLBC brewers have chosen to forgo modern conveniences like steel tanks and automated brewing systems in favor of “historically sound implements” — aka large porcelain vessels created by pottery students at the University of Chicago. The brewers have even opted to use sunlight and wooden tools for the malting and mashing of the brew.

Naturally, the project has encountered roadblocks. “Obtaining a yeast sample from the Middle East has been difficult.” The brewers originally enlisted an archaeologist to collect yeast samples during his travels, but he was unable to get the sample past customs. We decided to instead experiment with initiating fermentation using the bappir (barley bread) as our yeast source.” — GLBC Field Quality Specialist, Bridget Gauntner. 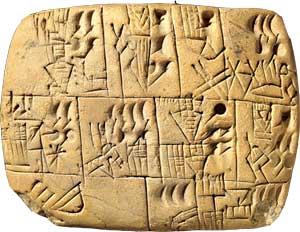 Portions of the finished beer were examined by GLBC brewers and lab technicians who hope to use what they’ve learned to inform and improve their second attempt in the fall.

Innovative consumer education is one of Great Lakes Brewing Company’s basic tenets, and Conway’s goal for this project is to educate the public and GLBC’s employees on the origins of beer. A second batch of Sumerian beer will be brewed in September, and will be used in conjunction with educational engagements only; it will not be bottled or distributed. Opportunities to learn more about the Sumerian Beer experiment will be shared by Great Lakes Brewing Company at greatlakesbrewing.com as they develop.

All in all, I think this beer project is one of the most fascinating to date, and I look forward to following the story.