Welcome to the second of three beer blogger interviews in a series featuring the brilliant (and ultra sexy) minds behind one of the hottest internet beer-themed video podcasts: New Brew Thursday.

Each and every Thursday, the boys from New Brew Thursday take their thirsty viewers on an adventure through beer geekdom. Some how, the boys seem to get their hands on some pretty rare and unique cult beers — and we are all forced to live vicariously through their video podcast tastings. Expect to see The Wench on a few of their shows in the very near future! 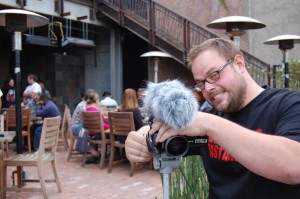 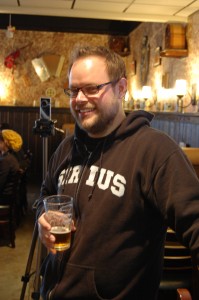 Grew up mostly in Fontana, CA, but I was born in San Dimas, CA, which is home to the AWESOME store, Lone Hill Liquor. Spent a majority of my life in the good ol’ Inland Empire.

I was never really into sports as a kid, and I’m not really all that into sports now. Sometimes I wish I were more into sports, or at least watching them. Looks like a lot of fun to be so involved with your favorite teams. But, whatever…

I don’t even remember what kind of beer it was–something cheap. Probably Budweiser or PBR. My friend and I got to have the beers left over after a Christmas party that his parent had as reward for cleaning up after the party. The beer sucked. It was a mystery to me why anyone would drink beer. My feelings have obviously changed over time…

I didn’t go to college. I wasn’t a bad student or anything. I graduated High school with High Honors and never missed a day of school. College just wasn’t for me. I fix and upgrade elevators now and play in a punk rock band called “Better Luck Next Time”. We’ve toured around the world and have a lot of fun. I don’t regret not pursuing higher education. 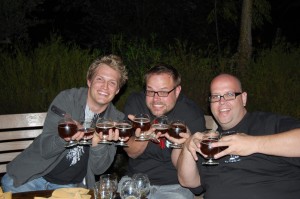 I remember it clearly: I was at The Grove in Anaheim, California to see Carrot Top [don’t hate–you know you all laughed at his comedy at least once in your life. Plus now, he could kick your ass… ;)].

I went with a few friends of mine, all of which drank Bud Light and Coors Light and such. One friend that was there, Jeremy, asked if I had ever tried New Castle. I said no and he ordered me a pint from the bar. The show was a dinner show, so we were served dinner during the performance.

We were eating barbecue chicken. When I tried the beer, I couldn’t believe how good it was and much it was NOT Bud Light. I was also impressed by how well it went with the food I was eating. Before then, I always kind of looked at craft brew at the time as something weird and outlandish. Only weirdos and alcoholics drank that stuff. I was 21 at the time and really had no idea why I thought the way i did about Craft beer.

Call it ignorance. Needless to say from that moment on, I would never look at Craft beer the same.

I got stuck in a rut for a long time of drinking very, very light and fizzy beers. Mostly because of the calories. I would drink the occasional New Castle here and there, but when I was with my friends–who to this day don’t understand why I love craft brew–Bud Light was the beer of choice.

I woke up one morning after a night of drinking and felt horrible. I don’t usually get hangovers, and this morning was no exception. I had a splitting headache that did not go away until later that night. Nothing else, just a bad headache. After a few more weekends of the reoccurring headache, I had a feeling it was the type of beer I was drinking. I wasn’t even drinking a lot. The smallest amount of Bud Light seemed to just trigger something. So from that day on, I stopped drinking Bud Light and switch to my now all time favorite beer, Sierra Nevada Pale Ale.

After consistently drinking good quality Craft brew, I noticed that I was spend a lot more time tasting the beer instead of just drinking it. That’s probably because there was something there to actually taste instead of the watery fizzy liquid that would give me a buzz. I haven’t had a Bud Light since, but that doesn’t mean I never will. There’s a time and place for everything. I just don’t see a time or place anytime soon that would facilitate me drinking a Bud Light… 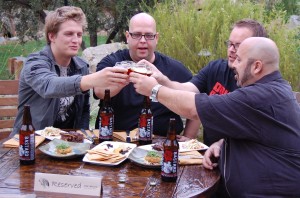 1. How long have you been involved with New Brew Thursday?

2. What inspired you to join New Brew Thursday?

I loved watching New Brew Thursday before I was a member of the show. I thought it was so cool that I had some type of guideline to follow for finding and tasting new beer. I looked forward to the show every week and was excited to come home from work, pick up the new brew for that show and try it. Now that I’m on the show, I’m thrilled to know that others are having the same experience I had back then and am still having now on the show.

What are you personal goals for your blog? What do you hope to achieve with it?

I think Stephen and Brad would both agree with me when I say that I think our ultimate goal is to inform as many people as possible about great, quality Craft beer, and to spread the idea of drinking what YOU like, not what others tell you to like. It’s all very punk rock.

4. What is one of the coolest things that happened to you as a result of being a beer blogger?

Shooting episodes on location at craft beer bars and breweries is awesome. I think so far, shooting at Stone Brewing Co. with Dr. Bill Sysak was the best.

5. What are you top 3 favorite beer blogs/beer websites? 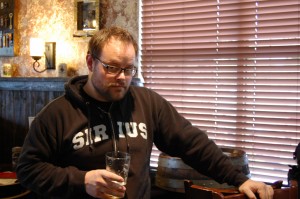 I don’t think I have any aspirations to work at a brewery. However, I would love to learn how to make some great home brew and just learn the techniques behind brewing beer. So, to answer the question, I think I’d want to learn from a local brewery in the I.E. [Inland Empire] called Inland Empire Brewing Co.. They make stellar beers, they’re awesome people, and are very brand new to the beer scene. Since they are so small and so passionate about beer, I think they would be the best people to get me on the right track to brewing great beer.

Not a Home Brewer, but I would like to be someday.

Not a one. But I can see myself pursuing some kind of certification in the future.

To date, my favorite beer and food pairing is The Lost Abbey’s Angel’s Share Ale with caramel cheesecake from The Cheesecake Factory. It’s freaking heaven in my mouth. 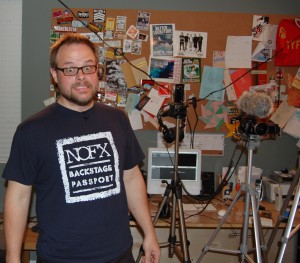 I build, repair and modernize elevators. I also play in a punk rock band known as Better Luck Next Time.

I think if I wanted to do anything full time, it would something involving art and computers. This could be graphic arts, video and film making, web design, or anything along those lines. I was not exposed to things like Photoshop until I was well out of school. So if I did go to college, I would pursue something in the arts. I’m a big Photoshop fan.

Not married. No Kids. I have a steady girlfriend of 6 years. She’s rad. Her name is Yvonne.

Like I’ve said before, I’m in a band so I love playing music. I’m really into New Brew Thursday too–not only for the show, but because I get to do a lot of the back-end production stuff. I’m no expert, but it’s fun and lets me play with my toys and gadgets. 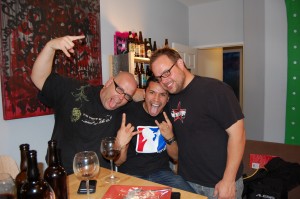 I would be an Pale Ale. I get along pretty well with anyone, and I’m not too scary… unlike some of those Stouts out there…

Stone Brewing Co. Double Bastard Ale. Probably the most delicious beer ever. It would also help a lot in numbing any pain I might feel while I’m being executed.

3. If you could be a superhero, what would you want your superpowers to be?

Superman. Hands down. Everything he does, i want to do. Flying is probably at the top of that list.

4. What is one of the craziest things you have ever done and lived to tell the story?

This might not be very crazy, but playing a festival called Punkspring in Japan in front of 10,000 people with some of the biggest punk rock bands of all time was EPIC for me. I drank so much free booze that night that it’s a wonder I lived to tell about it…

5 What are your thoughts on bacon?

It’s the other white meat, and goes surprisingly well with chocolate.

SPECIAL THANKS TO JOHN FOR HIS AWESOME INTERVIEW!