We both grew up in Billerica, Massachusetts.

Mike: Sipping my Dads Budweiser at a family BBQ in the back yard. There’s really, not much story to it.

John: I probably had a few sips from my grandfather’s PBR.

John: Emerson College and I studied Mass Communications. I was the program director of WERS for a year while I was there.

Mike: Guinness Irish Stout was the first beer that really opened my eyes to how different beers could be. At that time Guinness was pretty much one of the most unique things available. I had been drinking Sam Adams for the most part, but then went to my first Irish-styled pub near college. Its smoothness and depth of character was the most dramatic part that I remember. Drinking that beer made me start to really wonder how beer was made and what made different beers different. This eventually sprouted into my passion for homebrewing.

John: I would have to say that Sam Adams was my first connection to craft beer. At the time, I thought the color was outrageous. I mean, it wasn’t straw-colored…this has to be something special. I remember the mouthfeel and the bitterness were very different from what I was drinking. It seemed to have a lot more presence than whatever other beers I could get my hands on.

Mike: Sour beers in general have opened a new style catagory for me. Traditional lambics and berliner wiesse are now some of my most sought after offerings when I go to good beer stores or big beer-fests. Oddly, enough it started with a bottle of Sam Adams Cranberry lambic. Regardless, of what people think of that beer NOW, it was pretty revolutionary for the Boston Beer Company and most beer drinkers back in the late 90s. I remember taking my first sip from a 22oz bomber at a party. No one else liked it so I guzzled it down and loved it. It wasn’t until years later that I got a hold of some Lindemans Kriek and thought it too sweet, but it was still interesting. After having beers like Cantillion Kriek, DFH Festina Peche, and a special kriek from Cambridge Brewing Company that I really fell in love with the style.

We saw it as a good opportunity to start putting some of our own ideas about brewing and beer into words, and to share experiences with others.

Also, we wanted to become a part of the larger community of homebrewing outside of just brewing some beers in the garage once and a while.

We are just two dudes that like to brew.

4. What are you personal goals for your blog?

What do you hope to achieve with it? We hope to just reach a wide audience, stimulate good conversation, and help other new brewers along their path to better brewing.

Getting the occasional free sampling from breweries, getting highlighted in BYO’s “Homebrew Nation” section.

Allagash Brewing company has several great regular offerings, but they continue to experiment and push their own envelopes to keep the line up fresh. I think many a good brewery has lost favor because eventually no one wants to keep drinking their Pale Ale, Golden Ale or Amber anymore. Allagash strikes a great balance between great standard offerings and new and inventive special/seasonal releases.

Oh yeah, we are homebrewers!

Mike: My most unique brew is a big 15 gallon batch of beer I make then split into three secondaries to flavor with Strawberries, Blueberries, or straight up. I served it last July at our Independence Day cookout and called it Red Wheat and Blue.

John: I split a honey wheat ale into two parts. One I bottled and let condition as normal. The other part I put in a glass fermenter with a gallon of a honey/water solution. Two distinctly different beers from one batch.

Mike: I would maybe get into Public Health policy. 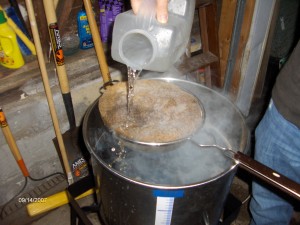 Mike: I’d be a super sour and bitter IPA that no one would touch!

John: An ESB. I think I would like to be a session beer.

Mike: I’d chug a Carrabasett Pale Ale (it’s no longer available though so I guess I’d meet my maker with a dry palate.)

Mike: I’d make a rich Amber ale with a black pepper finish and a bit of smoked malt to it. (Maybe get the black pepper essence from a Belgian yeast profile)

Mike: I’d want to be able to generate heat with my hands so I wouldn’t have to wait so long to get water to boil in the brewpot.

Maybe another time over beers……

Along with some perfectly cooked eggs, white toast and a side of hash, it’s as close to godliness as you can get.

SPECIAL THANKS TO THE BREW DUDES FOR AN AWESOME INTERVIEW!