AUTHOR OF: THE DAILY PULL

2. If you can recall, what is the story of your first beer? Where did you have it? What style and brand was it?

In high school, a group of friends pooled together some money at a backyard party to have somebody’s older brother buy us some beer. He came back with six packs of Mickey’s green grenades. It was the first, and last time I’ve had a green grenade.

3. Where, if applicable, did you go to college? What did you study? What additional activities, organizations, sports did you partake in during college?

I started college as an architecture student at Arizona State University. I finished college with a degree in Marketing from the University of Illinois at Chicago.

My love for craft beer started in the parking lots before and after Phish shows, where I was introduced to Sierra Nevada Pale Ale and Samuel Smiths Nut Brown Ale and Oatmeal Stout – always sold as ‘one for $3, two for $5.’

I feel like there have been quite a few beers and experiences that have worked to change my perspective on beer; in seeking out new and/or unique beers, I’m looking forward to more of these epiphanies.

Some of the more memorable include: drinking Three Floyds Ham on Rye and Goose Island’s Bourbon County Stout. My perspectives were continually challenged in my visits to the Map Room, the Local Option, and the Hop Leaf while I lived in Chicago; and the options in Portland have only worked to increase the number and scale of these experiences.

I started writing The Daily Pull in January 2010, about four months after moving to Portland from Chicago.

I’ve been seeking out and drinking good beer for a long time. We moved to Portland, OR in August of last year; I was inspired by the amazing beer scene here, which is dramatically different from the beer scene we moved from in Chicago.

I didn’t want a name that included the words ‘beer’ or ‘brew’, and I didn’t really want to use a play on words associated with beer or brewing. ‘Pull’ refers to the action of pulling a draft beer handle, or drinking a swig from a bottle. For some of us, we experience either on a daily basis.

3. What are you personal goals for your blog? What do you hope to achieve with it?

I use my blog to document my experience with beer. It allows me to look back on all the great beers we’ve had, events we’ve attended, and people we’ve met along the way. The blog, in addition to using Twitter, has been a great way for me to meet new like-minded friends. This was especially important to me as a newcomer to Portland.

4. What is one of the coolest things that happened to you as a result of being a beer blogger?

Spending time with brewers and having them give private tours of their breweries is one of my favorite things that has happened as a beer blogger. Free beer is also very cool.

5. What are you top 3 favorite beer blogs/beer websites?

This is a tough question to answer because we have so many good local beer bloggers in Portland. I really like Brewpublic.com – these guys know and write about all the local beer happenings in the Pacific Northwest, and they’re great people too. Beernews.org is a great source for national beer happenings. And, I think the idea behind Taplister.com is awesome; I’m looking forward to watching this site and the idea behind it gain traction across the country.

I’d work for Portsmouth Brewery, in Portsmouth, New Hampshire. I visited Portsmouth a few years ago, and have been looking for any reason to get back there. Working for a great brewer in town would be an amazing opportunity.

Not a homebrewer, but it’s something I’d like to delve into this year.

I don’t have any official beer certifications, and have never really given much thought to pursuing them.

I’m passionate about food and beer. I’d own a small brewpub with awesome food and drink, with a focus on sustainability.

Married to my amazing wife Jessica. No kids, but we have two dogs: Reno & Jack.

Cooking, eating, hiking with the dogs, road trips to the coast, riding bikes, playing music, traveling when we can, and hanging out with our friends. 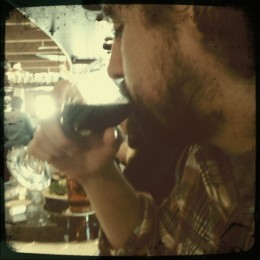 Anything coffee: you can usually find me with a beer or a cup of coffee nearby.

Two Brothers Cane & Ebel. This beer tastes like fall in Chicago to me, which are two of my favorite things.

Upright Brewing in Portland made a beer earlier this year called Fatali Four, a Belgian style beer aged in Pinot barrels with Fatali peppers. There’s something about the flavor and spice combination that comes to mind when I hear ‘beer’ and ‘wench’.

I’d want to teleport from one place to another.

We went deep sea fishing on a boat that was way too small and ran out of gas two hours off shore. When that happened, our fishing guide pulled out a huge bloody knife – for a second we thought we were dead, but we’re still here. He used the bloody knife to connect and siphon another gas line to the motor. When he got the boat working again, we celebrated with a beer.

Love it. Bacon makes everything better.

SPECIAL THANKS TO BRADY FOR AN AWESOME INTERVIEW!