Anyone who stalks … errrr I mean “follows” … DogFish Head Brewery as closely is probably aware that they have been searching for a new head brewer for a few months now. Well, I am pleased to announce that the highly coveted position has been filled by Floris Delee.

Check out the official press release:

Dogfish Head Craft Brewery is pleased to announce that Floris Delée is coming onboard as the Delaware brewery’s Brewmaster. Floris has worked in the brewing industry across the country and around the globe. “We are really proud to have Floris joining us as Brewmaster here at Dogfish Head,” explains Dogfish Head President Sam Calagione, “like a well-balanced beer, Floris brings the perfect blend of technical prowess and passion for creativity to our off-centered world.”

Floris Delée got his degree in Biochemical Engineering at the Karel de Grote-Hogeschool (University Charlemagne) in Antwerp, Belgium. He is a Brewmaster and biochemical engineer with a minor in waste water engineering.  Floris’ brewing career spans several continents. He started working for the Alken-Maes Breweries in Waarloos, Belgium where he wrote his thesis on the design and commissioning of the pilot brewing plant in 1993.

From there he went on to the New Belgium Brewing Company in Fort Collins, Colorado where he worked his way up from entry level engineer to technical director, leading the design and engineering departments.  Floris also went back to Europe to work for the Anton Steinecker Maschinenfabrik GmbH in Freising, Germany. 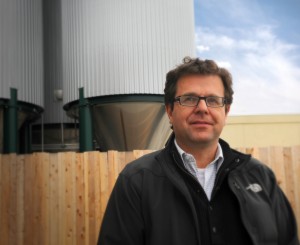 In 2002 Floris started his own engineering firm, Kathinka: Brewers, Process Engineers & Consultants, (http://www.kathinka.be/3_engels/kathinka.html) based on his unique international experience building and designing sustainable brewing and soft drinks operations. His primary goal with Kathinka was to pursue his never ending passion for innovative designs that form a solid balance between environmental, economic and social parameters. Kathinka clients in the United States include Boston Beer Company, Deschutes, New Glarus and Harpoon. Outside the U.S., Floris has worked with a diverse selection of breweries in the Caribbean and Central American (including Beliken Brewery in Belize, Banks in Barbados, Carib in Grenada and Trinidad, Cerveceria Baru in Panama, Banks in Georgetown, Guyana and Florida & Farm Ice in Costa Rica, the brewers of Imperial and Pilsen).

Through Kathinka, Floris has been working with Dogfish Head since January of 2009. He has spearheaded the installation of the brewery’s new 600-barrel outside fermentation cellar, the new Handtmann CIP system, and the Braumat process control system.  He has advised on numerous technical projects as well as on-going operations.  “Floris has earned the trust, confidence, and respect of our co-workers in his work here over the past year and that will go a long way in taking the reins of brewery operations,” explains Dogfish Head Chief of Operations Nick Benz. “The leadership, technical expertise, industry contacts, and creativity Floris brings to Dogfish will ensure we always have an offering of beers that pushes the envelope of what beer is and what it can be,” continues Benz, “we’re very excited he’s now part of our team.”

Despite believing he’d never return to working at a single brewery again, Floris was drawn to Dogfish, “taking on the Brewmaster role at Dogfish is intellectually intriguing because every aspect of brewing ‘off-centered ales for off-centered people’ is energizing and exciting,” explains Delée, “even for a Belgian there seems a never ending quest for innovation and experimenting at Dogfish, that is exciting, something I look forward to being part of.”

In addition to his passion for beer and brewing, Floris is currently studying for his certificate in winemaking at the University of California, Davis.

Floris and his wife Christine have four children.