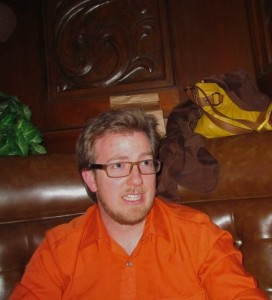 AUTHOR OF: THE STONE BLOG + THE BEERCHOOSER BLOG

2. How old were you when you had your first beer?

3. If you can recall, what is the story of your first beer? Where did you have it? What style and brand was it?

I split a 12-pack of fizzy yellow beer with the valet parking attendant at my classmate’s bat mitzvah.

4. Where, if applicable, did you go to college? What did you study? What additional activities, organizations, sports did you partake in during college?

Columbia University. I studied history and anthropology. I was an anti-globalization activist, rakish troublemaker, and young bon vivant. New York is a great town in which to ply those trades. 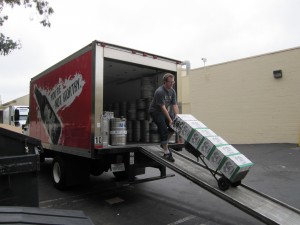 Although I drank plenty of Brooklyn lager in college, my epiphany came shortly after I graduated. In the process of courting the lovely girl I now live with, I made regular visits to Chicago. She lived in Andersonville, near The Hopleaf, a Belgian-focused beer bar of legendary repute. A tulip glass of Tripel Karmeliat blew the doors off my life. I fell in love with the beer and the girl at The Hopleaf.

That fortuitous glass of Tripel Karmeliat turned me on to Belgian beer, but it was an AleSmith IPA that turned me on to American craft beer. Another AleSmith beer showed me just how epic beer can be: Kopi Luwak Speedway Stout, a beer made with weasel shit that tastes like rainbows. That removed any doubt that beer is, in fact, the most dynamic and delicious beverage on Earth. 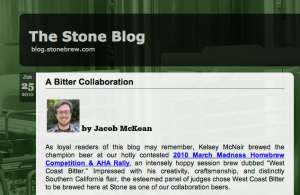 At Stone, 8 months. At beerchooser.com, intermittently for a couple of years, I think.

Well, writing for Stone is my job, so fear of starvation is the prime motivation there. BeerChooser.com is a personal project designed to help people explore craft beer, especially those bewildered by the array of options and worried about wasting money on six packs they won’t like, so that’s a labor of love.

You’ll have to ask the creative genius who came up with “The Stone Blog.” As for “The BeerChooser Blog”, well, that’s my groundbreaking originality.

People love Stone. They really, really love it. So I want to give them a look behind the curtain. As a beer geek, that’s what I want to see. For BeerChooser, it’s mostly site updates, press coverage, etc…I hope BeerChooser helps people explore craft beer with more confidence, as if they have a knowledgeable friend who consistently recommends beers they love. Except that the friend is a computer/phone instead of a human being.

I get a paycheck from a legendary craft brewery for which I have oodles and oodles of respect. That is the coolest. Plus, I get to go to some events for my job that I would gladly pay to attend. OK, so the whole thing in general is pretty cool. But don’t think I don’t work my ass off; I do. In fact, I have very little ass remaining at this point. 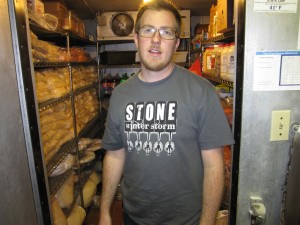 I wish I were chopping wood at Brasserie Caracole in Belgium for their wood-fired kettles. That sounds far better than taking pictures at obscenely decadent beer and food events.

Yes, I am. I recently brewed an American Pale Ale that creates wormholes in the space/time continuum every time you crack one open.

I have a purple belt in Taekwondo. It helps me hold my own on judging panels. 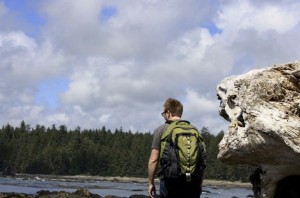 Social Media Coordinator at Stone Brewing Co. I attend to my adoring fans on Facebook. In the 8 months I’ve worked at Stone, we’ve gone from 18,000 to 52,000 “Likes” on our Facebook page. My personal goal is to surpass a certain (insipid, deceptive, bullshit) lunar-themed brand with around 58,000 fans. If I do that, Greg has promised me a Fabergé egg filled with leprechaun tears from his personal collection. I’ve also been doing a lot of work on the European brewery project.

I would be an Afghan opium lord. I wrote a short story about the subject in 5th grade, and it’s been a dream ever since.

I rip phone books in half for stress relief. 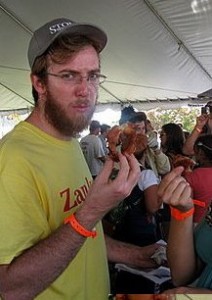 I would be a maple-wood smoked rye imperial brown ale fermented & lagered with a mix of Belgian, German, and American yeasts and aged in a toasted American oak barrel.

Russian River Temptation. I forget the batch, but my first bottle of that beer had more white wine character than the subsequent bottles I’ve had. The smell and taste of that first bottle were so good they nearly melted my face off.

Sorry, but I don’t believe in contract brewing. I think it undermines the authenticity of craft beer and misleads consumers about beers’ origins. If your name is on a beer, you should be making it yourself, on your own equipment.

The ability to conjure up a plate of vegan tamales and a live mariachi band at a moment’s notice.

I went to a baile funky (literally, “funk dance”) in a Rio slum. There were a thousand people dancing inside a crater in the middle of the favela. Teenage drug dealers were walking around, hitting on girls and firing their machine guns in the air. They had crews of younger kids with handguns stuffed into their swim trunks who were drinking cocktails, smoking joints, and sniffing glue. There was an enormous wall of speakers blasting music so loud it made your brain vibrate. The dancing was frenetic, endless, and—to put it mildly—suggestive. Compared to that spectacle, the parties you see in hip hop videos look like ice cream socials hosted by the Yale a cappella club.

I’m a vegan. I could fuel my Hummer with a pureé of rainforest trees and endangered coral reefs, and it wouldn’t equal the environmental impact of eating animal products.

SPECIAL THANKS TO JACOB FOR AN AWESOME INTERVIEW!