Collaborations are hella exciting (whoah, California has completely taken over my vocabulary). Heck, new beer releases are uber exciting, especially when they are between two breweries for which I have a lot of admiration, adoration, and respect. Super excited to announce the recent collaboration between New Belgium and Allagash — Vrienden, a funky sour concoction made with weird ingredients such as caramelized endive and hibiscus. 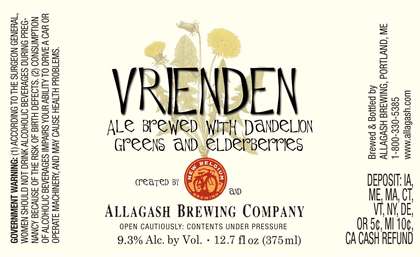 This is the first time I’ve gotten wind of the beer, which means that I’ve been a really bad Internet beer stalker. I’ve attached the press release below. Not sure what the distribution will be, but I’m really hoping to get my hands on some. Hopefully, it makes its way up to wine country … cause it would fly off the shelf up here. 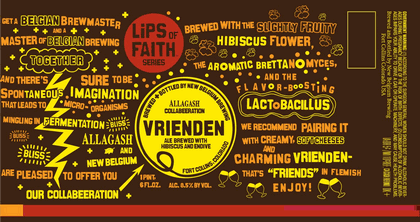 New Belgium Brewing of Fort Collins, CO and Allagash Brewing of Portland, ME are pleased to announce the release of their collaboration ale, Vrienden (Flemish for friends). Brewed with caramelized endive and hibiscus, Vrienden is inoculated with lacto bacillus and brettanomyces, creating a slightly sour beer with a floral nose and a dry finish.

“We wanted a very simple sour so as not to compete with the hibiscus,” said New Belgium Brewmaster, Peter Bouckaert. “When we ran tests using our La Folie bretta, it was too intense and the hibiscus disappeared. The Allagash microbes bring just the right amount of sour and elevate the hibiscus notes where they belong.”

Allagash founder, Rob Tod, and brewmaster, Jason Perkins collaborated with New Belgium brewmaster, Peter Bouckaert, and Assistant Brewmaster, Grady Hull, at New Belgium’s Mothership facility in Fort Collins last September. They started the day sautéing endive in New Belgium’s employee kitchen to achieve caramelization. When asked what the endive would add to the beer, Bouckaert thought for a moment, shrugged and said simply, “endive.” The team later pitched endive into the mash and hibiscus into the kettle.

One thought on “New Belgium and Allagash Brewing Create Vrienden, the BFF Beer for Life!”