This past weekend, Black Star Beer played gracious host to its staff, partners (graphic designers, clients, distributors etc.) and myself. Upon arriving on Friday night, Black Star beer surprised all of us with a beer dinner.

I have attended and even hosted several beer dinners and beer pairings events, with each and every one being unique and special in its own regard. But I must admit that this particular dinner was one of the most unique and intimate I’ve experienced to date. Black Star lined up a super long banquet table right on the brewery floor next to the fermenters. The normal lights were turned off and the brewery was lit by candles and soft spotlights that illuminated the fermenters. 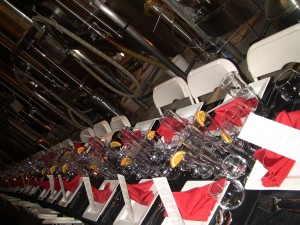 Aside from myself, the owner, brewmasters and maybe a few others — most of the group had never attended a beer dinner before. And many of them weren’t even familiar with the concept. Observing everyone’s reactions and expressions during the dinner was probably my highlight. Don’t get me wrong, the food and beer experience was amazing. But what was even more amazing was watching people experience the perfect synergy between beer and food for the first time. And I guarantee it will not be the last.

As with most food and beer related events that I attend, I often find myself too preoccupied with taking pictures of my food, taking notes on the pairings, as well as instantly posting my pictures and descriptions to Facebook and Twitter. One would assume that I would know better by now that half of the beer dinner experience is living in the moment and engaging with others and not living virtually on electronics and mobile devices.

I was once told at a really fancy beer dinner, “Funny how ANTI-social social media makes you, huh Ashley?” Touche my friend, touche. 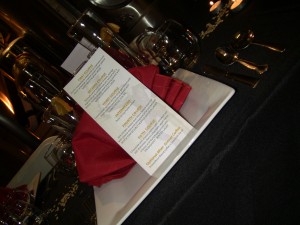 Not familiar with my addiction to social media and incessant need to post everything I eat and drink, my surrounding neighbors were slightly confused by my obsessive-compulsive picture taking behaviors and lack of social engagement with the group. But this all changed once they realized who I was, why I was there, and what I was actually doing. However, the group was too lively and engaging for me to bury my head down in my laptop and phone and so, even before the first course was finished, I retired my mobile devices and virtual realm and joined the real life excitement.

The dinner itself was extremely impressive. It consisted of 5 courses, each paired with a different Great Northern Brewing Company beer. My notes are as follows…. 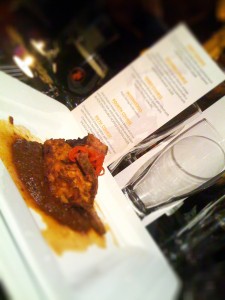 Paring notes: The chocolate and coffee malt notes in Fred’s Black Lager complimented the espresso and cacao of the mole sauce while the light dry body of the lager helped to cut the spice from the ancho and balanced the heaviness of the dish. The sweetness of the fried sweet potato enhanced the malt character of the beer, but the light dry body of the beer cut the fat and oil. The overall earthiness of the dish paired really well with the roasted flavors in the beer. This was definitely a hit in my book. 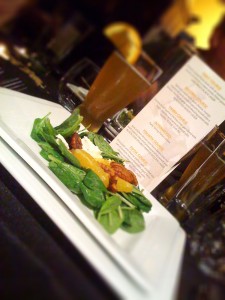 Pairing notes: To start, I must admit that this was my first experience with a wheat lager. The texture and flavor of the beer was similar to wheat beers brewed with ale yeast, but the esters were not the same (actually, there were no esters). The beer was uniquely clean. As for the pairing, this was definitely a slam dunk. The salad, like the beer, was light, fruity and slight tart. This was an extremely refreshing pairing — one that I wouldn’t mind enjoying on a daily basis! 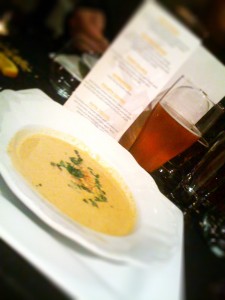 Pairing notes: OMFG (really, it was that good). The soup was creamy and rich, without being too heavy. The heat from the curry was softened by hints of coconut milk and cooled by the cilantro. The crunch of the peanuts added a nice texture. The IPA was beautifully balanced, mostly pale malt base with a bit of crystal for coloring with Cascade and Centennial hops used for flavor and aroma. I’m a big advocate of pairing IPAs with spicy food. The pairing could not have been any more on spot.

Side note: As a student of beer, my latest preoccupation and obsession has been learning about hops and how they affect the flavor and aroma of beer. My favorite game to play is “name that hop.” And more and more these days, I also have been playing “guess the malt bill.” After tasting Going To The Sun for the first time, I wanted to take a shot at both games. (I think I scared the brewmasters a bit by bombarding them with questions.) I missed one of the hops (I said Chinook instead of Centennial), but other than that I wasn’t too far off. 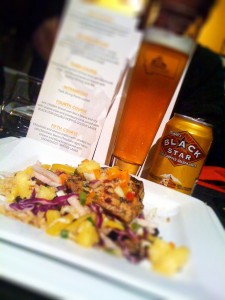 Pairing notes: This pairing was a fiesta on the tongue. The acidity from the pineapple salsa and the earthiness from the rice and beans were nice compliments to the heat from the jerk chicken. The beer was light-bodied, but extremely flavorful for a pale lager. Overall, the Black Star lager was definitely the star of the pairing, bringing a nice malty sweetness that complimented all the flavors of the dish. 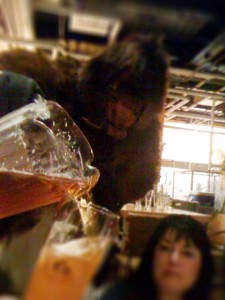 (Pardon the picture, I totally missed the ball on taking a pic of the last dish. This is a pic of the Yeti “Beer Wench” who snuck into the brewery during our dinner and was gracious enough to refill our glasses…)

Pairing notes: Can one really go wrong when pairing chocolate, cheese and beer? The bacon chocolate was absolutely amazing, but then, we all know that the Wench is obsessed with bacon. The SnowGhost winter lager was one of my favorite beers of the night, rich roasted malt flavors and slight hints of coffee — an excellent beer to pair with chocolate. 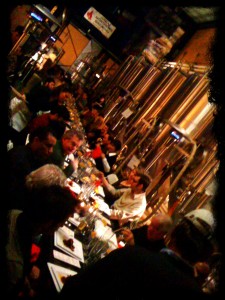 Whereas the food and the beers were great, it was the energy of the guests that really made the dinner special. Speeches were made, and lots of cheering, hooting and hollering happened all night long. Every single person at the event was happy to be there and extremely proud to work for or with Black Star.

Needless to say, I was a little blown away by the experience. And I was more than blown away with the rockstar treatment I received. The Black Star crew treated me as one of their own, always making sure I had a beer in my hand and constantly checking in to make sure I was doing okay.