AUTHOR OF: BREWING SOME FUN & DRUNK AND UNEMPLOYED 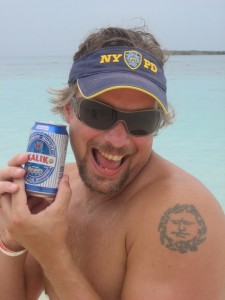 I grew up on Long Island in the town of Sayville. It’s midway from NYC and the Hamptons, on the South shore.

I did not play any team sports. I’m more of a self-motivator and am into weightlifting and running. I also have a 2nd degree black belt in Isshinryu karate.

I was around 12 or 13 years old when I drank my first “official” beer, meaning not just a sip of my parents’ beer.

I stole 2 beers from my parents, I think they were Piels, and drank them in the woods near our elementary school with a friend. We drank one warm Piels each and were stupid buzzed. We never got caught and continued to steal beer and liquor from our parents for years afterwards.

I went to the State University of New York at Buffalo (UB). I have a Bachelors and a Masters in geography which, surprisingly, I actually use in my day job to this day (I’m a Geographic Information Systems (GIS) programmer). I was briefly in he power lifters club (too many meatheads) and the geography club. I was in no fraternities, although I was heavily recruited. That’s how I roll. 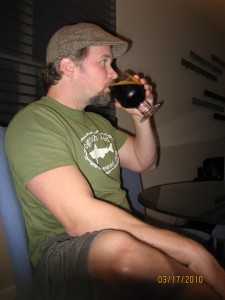 My first craft beer epiphany happened when I was in college. I graduated in 1997, so my epiphany happened over 15 years ago. I cannot recall exactly the details, but I remember drinking things in Buffalo that I never saw on Long Island; regional beers like Saranac, Utica, Genesee, and Dundees. Most importantly, though, was Pete’s Wicked Ales. I tried them, fell in love with them and drank them constantly. Pete’s is now defunct as of last year, and if you’ve had them, you are probably thinking, “those are horrible beers”. But 15 years ago, in Western New York, our choices for craft beer was pretty limited.

I had a few craft beer epiphanies since college, but in 2009 I had a second major epiphany. I have been attending the Great American Beer Festival almost every year since I moved to Colorado in 1997. But something was different about 2009. I was just getting into social media and was learning about all the different things I should be trying. I knew nothing about Stone or Dogfish Head, but when I saw the lines that year, I became intrigued. I went to the liquor store and bought these beers…and loved them. I started reading blogs, looking up beer people on Twitter and looking for breweries in Facebook. I found more and more things to try. It’s been a 2 year long epiphany and is still continuing today. 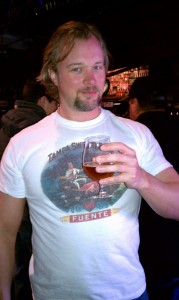 I’ve been writing about beer since my second major epiphany, 2009. If you were to go to my personal (original) blog, you could actually track the history.

I tried my hand at technical blogging (programming), creating personal websites, etc. But never was really interested in writing about the very thing I was doing for 8+ hours a day already. I’m interested in weightlifting quite a bit, but felt I really had nothing to offer that was new or different in that area. Beer was a different story. Taste is subjective, and I felt I could offer my own perspective on beer.

My original blog is my name. Not very original. Brewing Some Fun was named by Kevin Petruzielo who asked me to join the blog earlier this year. Drunk and Unemployed…well that one is just funny. I write for them because they asked me, plus one of them is an old elementary/high school acquaintance. I like Drunk and Unemployed because I write about things other than beer for them (liquor).

I want to educate others. I want to tell others about Colorado’s great beer scene. I want people that don’t know about or understand the craft beer revolution to learn about it and be a part of it.

Something cool happens every day. A new person adds me on Twitter. Someone connects to me on Google+. An individual leaves a comment on a blog post. I am mentioned on one of the social media sites. It’s all cool.

Other than the ones I write for; Hoptopia.com, Beernews.org and newbrewthursday.com. Beer Tap TV used to be one of my favorites…but I am not sure what is going on there. 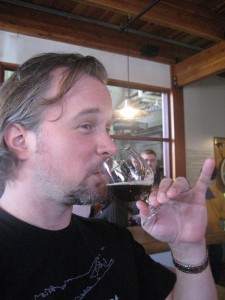 Dogfish Head, because they are right near the water (which I love), on the East Coast (which is where all of my family still lives) and they are just my style; off-centered.

I was a homebrewer in college and would like to start again. I have some neighbor friends that I may start with soon. Back in college, I brewed a beer I called “Dark Star Chocolate Cherry Stout”. I was a minor deadhead and brewed a beer that was a stout with cherries, therefore the name. It was a sweet and sour-ish stout.

Definitely beer and cheese. I personally like an IPA and a sharp cheese, but even find creamy cheeses to be great with IPAs.

I am a programmer, specifically in GIS. In short, I write mapping applications on steroids.

Own a gastropub. I like good food, good beer and good cocktails and would love to share that with others (plus enjoy it everyday myself).

I am married and have 2 kids (3 and 7) and a stepson (13). Drinking with kids is a challenge, but with planning, it can be done. I am a testament to that, look at my untapped profile and you will see.

Weightlifting and music. When it comes to music, I have no particular style and can listen to everything; from jamband to metal to bluegrass to classical to jazz to pop and everything in between. 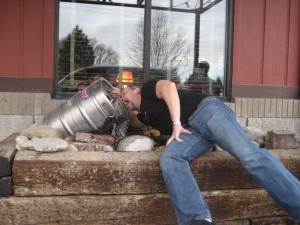 Wow, this is the question that took me the longest to think about. One has to think about how they perceive themselves against how they think others perceive them. So I will go with the former since that is easier. I’m very open minded, mellow until agitated, soft spoken, perceptive and thoughtful. This would probably make me a Wild Ale. It’s not my favorite style, but it fits my personality quite well.

Pliny the Younger. This beer might be a lot of hype, but I loved it when I had it. It was hoppy, but very well balanced. I would want something I am familiar with, not something I never had before. And, something high in alcohol. And something epic. PtY is perfect in this situation.

The Beer Wench I know on Twitter is a strong, independent individual, a person without boundaries, a borderline gypsy, and outspoken person; yet considering all of these, is still a fragile individual with true feelings. Is this too deep? Regardless, The beer would have to be something completely unique; A IIPA Wild Ale brewed with rose petals. It sounds cheesy, but think about it…it makes sense and is absolutely perfect.

I am pleading the 5th on this one. I’ve done crazy shit that I would never tell anyone. Most of the crazy things I did were early in my life. Nowadays, I am interested in staying healthy and intact for my kids. And for drinking.

I love bacon and eat it as often as I can, usually for breakfast, but sometimes I throw it in dinner. But I don’t like it in my beer damnit!

SPECIAL THANKS TO CHRIS FOR AN AWESOME INTERVIEW!