Today I am truly honored to introduce you to my good friend Eric Surface, the very funny and always charming Jack-of-all-trades and owner of Mt. Tabor Brewing Company in Vancouver, WA. Eric is also an advocate of the beer cocktail movement, which you all know is near and dear to my heart! Cheers!!! 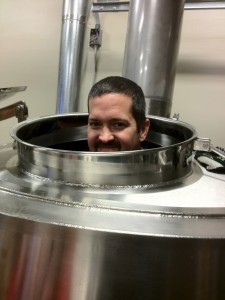 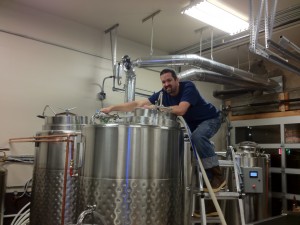 I started out as a homebrewer with several friends.

How long have you been brewing at Mt Tabor?

Originally, it was known as the Mt Tabor Brew Crew and there were 5-6 of us who got together once a month to brew beer post marriage and kids. It was our excuse to get together and hang out once a month. Eventually there were two of us who were hooked on it and that’s when the ball started rolling downhill. Hence Mt Tabor Brewing was created over one too many beers if I remember right. 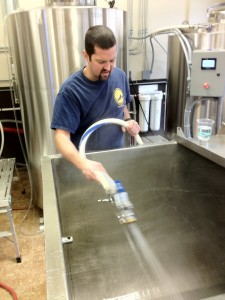 Originally it was the Asylum Ave IPA, I think I brewed that beer at least 30 times before I got it where I wanted it. But as of the past few years my all time favorite house beer is the Sibeerian Bull Imperial Stout. I only brew it once a year and it can last several years. I just finished off a keg that was from 2009.

Up until recently, my favorite food and beer pairing was an Imperial Stout Float. Take the Sibeerian bull and combine it with either coconut or peppermint candy ice cream and I’m hooked. Recently we did a food and beer paring dinner with Tommy O’s Pacific Rim Bistro in Vancouver. That night I realized how well a hoppy IPA that’s fermented with a Belgian yeast pairs with a simple salad that had butter lettuce, citrus wedges, fennel and a citrus vinnagrete. Probably one of the best beer/food pairings I’ve ever tasted. 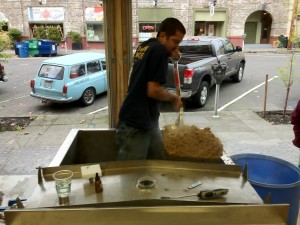 What is the best part about working for Mt Tabor?

My favorite part of working at the brewery is the freedom to express my creativity. I love combining beer styles that i like to create something that’s unique to MTBC.

Probably something that’s bitter, I’m becoming a bitter old man these days due to lack of sleep. 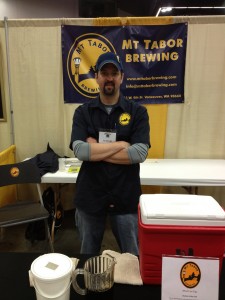 My wife and kids are very important. With the amount of time I spend on my regular job as well as getting the new brewery location firing on all cylinders doesn’t leave much time for anything else. So what ever they want to do I’m in or at least I’m along for the ride. We like to explore the cities around us, travel to the mountains and spend time outdoors and hang out with other families. My wife and I like to sample new restaurants whenever we get the chance, you never know where we might want to get a tap handle at next…

One thought on “Inside the Mash Tun: Eric Surface of Mt. Tabor Brewing”