As an advocate of both craft beer and Slow Food, I really admire the mindful brewers who take “extra” steps to produce artisanal beers inspired by local ingredients. One such brewmaster is Jared Rouben of Goose Island’s Clybourn Pub in Chicago, IL (still a privately owned brewpub which was NOT included in the Goose Island Company sale to In-Bev).

What makes Jared truly unique amongst brewers is his extremely impressive restaurant industry resume. Before following his calling as a brewer, Jared spent time working in some of the best kitchens in the world — including Thomas Keller’s three Michelin Star Per Se in New York City. He is also a graduated of the Culinary Institute, as well as the Siebel Institute of Technology — America’s Oldest Brewing School. 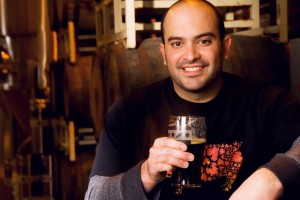 Since joining the Goose Island team in 2009, Jared has been focused on bringing innovations in cooking to brewing. One such project is the Famer’s Market Series. Each week, Jared and his fellow brewers peruse through the local farmer’s market seeking inspiration from high quality, fresh ingredients. After selecting various treasures, the team heads back to the brewery for some Farmer’s Market R & D. A week later, a new seasonally relevant beer appears on the menu.

After reading a recent article in the Chicago Tribune about this innovative brewing project, I knew I needed to ask Jared a few questions of my own. And like the little good brewer boy that he is, Jared complied. 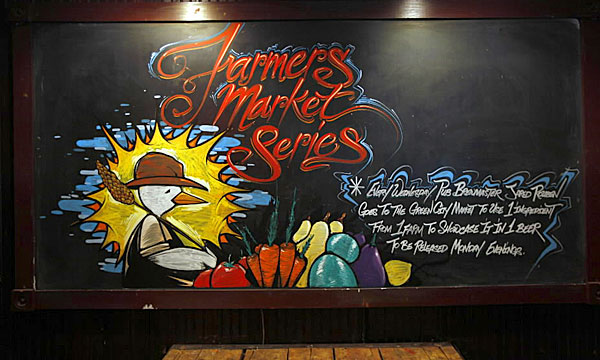 Beer Wench: How long have you been brewing beer’s inspired by ingredients found at the Farmer’s Market?

Jared Rouben: I was first inspired by the farmer’s markets when I was out in Napa cooking at the Martini house. I just remember going to the Napa farmers market and cutting open an heirloom tomato and thinking this has the colors of a firework display, truly beautiful. And having the farmer’s and produce from the Green City MARKET a stone’s throw away makes me feel like a kid in a candy shop. Fruits and vegetables with the most intense flavors and colors created by people who really love what they do and produce. I love it so much. The farmers are like family and the Green city market is something that I look forward to every year.

Why did you decided to start the Farmer’s Market series?

I realized that the best chefs in the city were going to the market every Wednesday and Saturday to get the best ingredients — and as a brewer why wouldn’t I do the exact same thing? I know that in order to make great beer you have to start with great ingredients. And there was no better source for great ingredients then at the Green City Market. It has also been an excellent way of challenging my palette and given me a stronger understanding of ingredients we might not normally find in a brew house.

What have been some of your biggest “successes” in the Farmer’s Market series?

You have to give credit to the great ingredients for the great results. Some of my favorites have been the paw paw pale ale, bubble gum plum Belgian blonde , and the Apple wood smoked helles

Any flops, or beers that didn’t quite meet your expectations?

There are a couple beers where the ingredients just didn’t show themselves in the fashion that I had hoped. This makes me so sad because the last thing I am trying to do is compromise the complexity of the ingredient or the integrity of the beer style. they should go hand in hand and compliment each other. The blueberries in my blueberry oatmeal stout were MIA, which was a shame. I should have increased the amount of blueberries because of the high water content.

During which stage of the brewing process do you typically add the ingredients found at the Farmer’s Market?

This really depends on the ingredient. I usually gravitate towards adding the ingredient post fermentation so that we showcase the ingredient with as little manipulation as possible in its natural state.Produce like this is so tasty that to change it should be a crime. However, there are some ingredients like the klug farm fairy tale pumpkin that I put in the kettle during whirlpool. You have to be careful because there are few ingredients that show themselves better after being submerged in a 200 degree liquid.

I try to go into this with an open mind. I start at the market so I start with the ingredient and then head back to the brewery to taste all of our beers in the tanks and on tap. There are so many times that I am sure an ingredient and beer will work together but after tasting it, I am left disappointed. It’s very important to taste everything and keep an open mind. The best part of this series is the delightful surprises you figure out through tasting

What does a typical R&D session for the Farmer’s Market series consist of?

Tasting, tasting, and more tasting. What is really important is tasting the beer every day after it has been infused. The beer will change every day as the ingredient and beer become more accustomed to each other. As the flavors change it’s important to transfer it as soon as you think its perfect.

Do you foresee turning any of your creations into commercially available product (aka sell it outside of the pub location)?

I don’t see this happening in the near future. These beers are truly created to be consumed during the season the ingredient was produced.

Does the pub and/or you design food pairings around the new beers?

Not yet but hopefully we can do this in the future. I have the luxury of working with Chef Andrew Hroza who is not only a chef but also a cicerone and hombrewer.