Yesterday marked the 2nd Annual International #IPAday — a global celebration dedicated to one of craft beer’s most beloved and iconic styles — the India Pale Ale. Last year, a lot of people wanted stats on the event — specifically Twitter stats — but I was unable to track down any tools that could give me a solid picture.

This year, that all changed. Thanks to the kind people at HashTracking. com, I was able to get my hands on a pro-report for a 24 hour period spanning from 2am (PST) on Thursday, August 2nd to 2am (PST) on Friday, August 3rd. As a result, this report is biased to the U.S. West Coast, and doesn’t completely represent the global picture of International IPA Day.

It is important to note that, outside of the U.S., reports of IPA Day were recorded from Europe (mostly the UK), China, Japan, New Zealand, Australia & Brazil — as well as other countries that I haven’t been able to officially capture data from. Although, many of these countries were very active on IPA Day, due to the major timezone differences, the data I’m sharing with you today mostly reflects the Western Hemisphere and U.S. participation in IPA Day.

First, let’s talk about general stats. In the course of 24 hours, the #IPAday hashtag was tweeted 11.8 thousand times by 8 thousand people with a total followership of 5.1 million. This yielded over 10.2 million impressions.

The majority of tweets (in the thousands) were sent between the hours of 7pm PST and 9pm PST — roughly 10pm-12pm EST. 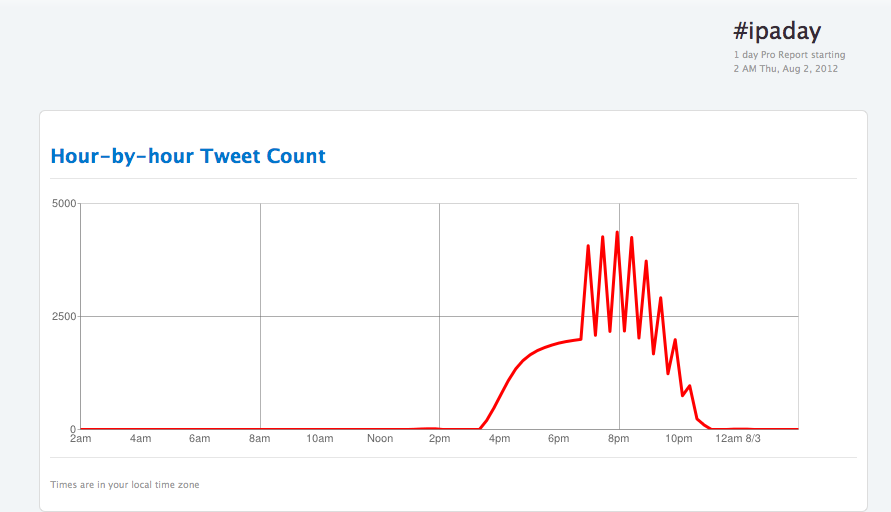 Now, let’s talk about the big hitters on #IPAday — aka the influencers. First we have the categories for Most Popular and Most Tweets. The most popular #IPAday tweets were determined based on number of mentioned and number of retweets. Most Tweets speaks for itself. 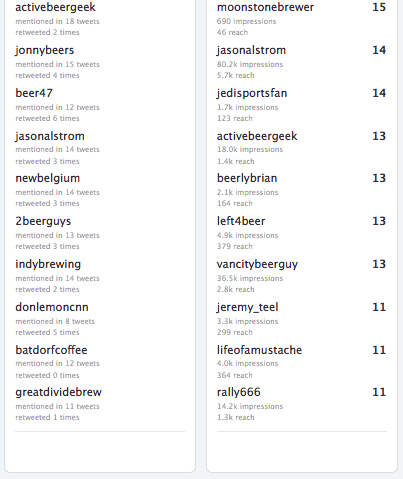 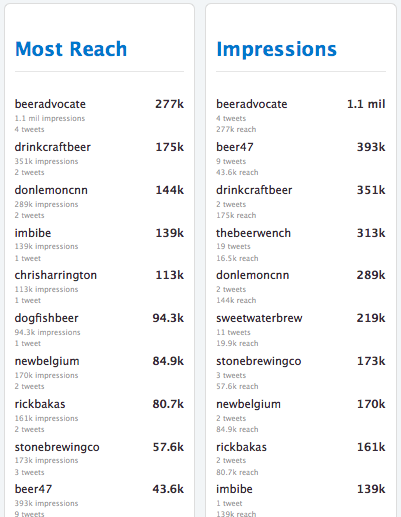 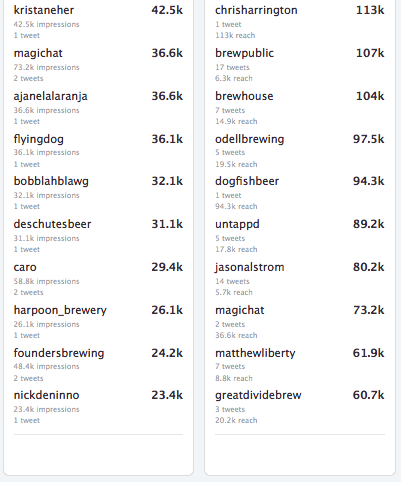 When it came down to where all the action took place, I relied on Trendsmap.com for real-time local Twitter trends. Sadly, these graphs are impossible to capture after the fact, so sadly all I have are two screen shots of the map — one of the world and one of the U.S. Luckily, they were taken during the “high traffic” time of #IPAday posts, so I do think the screen shots are on spot when it comes to tracking activity.

According to Trendsmap.com, throughout the day, the hashtag #IPAday trended, at one point or another, in the following North American cities: Vancouver (Canada), Seattle, Portland, San Francisco, Boise, Phoenix, Los Angeles, San Diego, Las Vegas, Denver, Austin, Houston, Jacksonville, Orland, Atlanta, Charlotte, Raleigh, Washington D.C., New York City, Philadelphia, Manchester, Boston, Indianapolis, Grand Rapids, Detroit, Chicago, Milwaukee, Kansas City, Des Moines, St. Louis and Winnipeg (Canada). And there were probably other cities that I didn’t see or write down because the map changed so frequently. But, you have to admit that this is a pretty damn good snapshot.

As for the most active cities, noted by the size of the #IPADay box floating over them, Atlanta, Philly, Chicago, Austin, San Diego, San Francisco and Vancouver take home the cake as the most popular IPA Day locations. The most amount of tweets during the day seem to have been coming from those cities. If I had to pick just one, I would say that Chicago was consistently one of the most popular, if not the most popular, #IPADay cities all day long.

The most impressive statistic, in my eyes, was Brazil, who consistently appeared on the Trendsmap all day long. U.S. and U.K. was expected to trend — but Brazil? Now, that is impressive!

As for the other social media platforms, little data is known. Unfortunately, Facebook’s privacy features do not allow us to get an accurate snapshot of IPA Day related posts. All we can do is estimate that Facebook had a similar overall participation number to Twitter (which was 8k, if you remember). Add fan pages into the mix and this number is amplified. As for Instagram, Pinterest, Google+, Flickr and all the other social media sites — that data is not also available at this time. However, the ever popular beer-themed social media platform Untappd should be releasing its data within a few hours or so — which will give us a little more insight.

When it comes to blog posts and articles from noteworthy media sources, hundreds if not thousands of sites made IPA Day reports. Other than doing a Google search on the terms #IPAday and IPA Day, there is little data that I have outside of my guesstimate.

Moral of the story is that the 2nd Annual #IPADay was a tremendous worldwide success. And I can say this with complete confidence, with or without statistics. Most people can probably agree that 8k+ people talking about craft beer on the Internet is a good thing for the industry, regardless of whether or not they personally “agreed” with the celebration concept. I also think it is safe to say that this has been the biggest virtual craft beer party to date — something you (my fellow par-tay people) should all be proud of.

And on my last note, I want to send a tremendously grateful toast to each and every single one of you that participated in #IPADay for your support and advocacy of craft beer! It is because of all of you that craft beer continues to grow and thrive in today’s crazy world and backwards economy!