I’ve been known to get in long and exhausting debates with people about corporate America. Especially, when it comes to the beer industry. In fact, I recently endured a long-winded friendly argument with an individual in my local brewpub about Coors. In my opinion, there is never a time for Coors. I would rather drink a homemade cocktail of vodka + soda water + hops extract. Throw in some corn extract and you have an alcoholic beverage comparable to any of the “Big 3″ lagers. No joke. 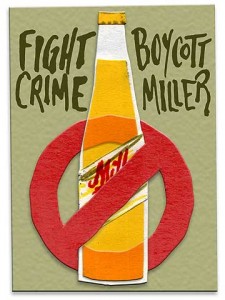 Naturally, when it comes to the big scary world of capitalization and America’s corporation-controlled economy, one has to pick ones battles. As much as I would love to fight them all, the reality of doing so is easier said than done.

One battle in particular that I’ve personally chosen to fight is “Beer Wars” . This term was recently coined and popularized by director Anat Baron. Baron’s movie “Beer Wars” provides a no holds barred exploration of the U.S. beer industry that ultimately reveals the truth behind the “Big 3″ corporate beer companies. Told from an insider’s perspective, the film goes behind the scenes of the daily battles and all out wars that dominate one of America’s favorite industries. 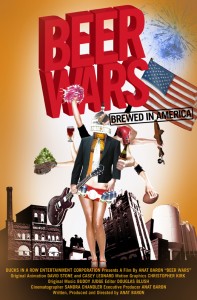 As if the craft beer industry did not have enough turmoil WITHIN ITSELF, another corporate beverage tycoon has recently decided to declare war on the craft beer industry. Craft beer’s newest enemy is an energy drink. Yes, you hear that right. AN ENERGY DRINK. Why a MULTI-BILLION dollar, NASDAQ-listed company wants to pick a fight with a small, limited-distribution craft brewery is beside me. I am completely baffled. And very, very pissed off.

So here is the general jist: On September 14th 2009 — Hansen, the publicly traded parent of Monster Energy, slapped Rock Art Brewery, a small craft brewery in Vermont, with a Cease and Desist order on the name of its American Style Barleywine — VERMONSTER. In its letter to Rock Art Brewery, Hansen makes the asinine claim that “use and registration of VERMONSTER in connection with beer will undoubtably cause confusion or/or dilute the distinctive quality of Hansen’s Monster marks.”

Katie over at Gonzo Gastronomy posted a great write up on this battle: “All the dishes rattle in the cupboard when the elephants arrive…” 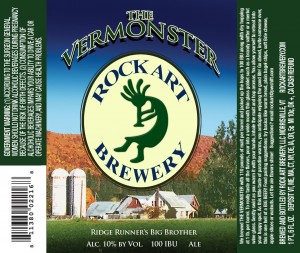 Think this is some sick joke? Think again.

In the video below, Matt Nadeau of Rock Art Brewery sits down with Green River Pictures to let the world know his side of the Monster Energy drink Trademark lawsuit.

“I’m a man of principles and it’s principles at stake. It’s liberty at stake. It’s justice at stake. And I’m being told that it’s for sale. I don’t buy it. Thank you for listening and jump on our website, get the links and run with it AMERICA. Let the corporations know who actually has the power in this country, where your dollars and and what your going to do.” – Matt Nadeau

I’m extremely impressed with Matt’s refusal to back down and I am in full support of Rock Art Brewery. My dollars will never EVER again support the Hansens corporation.

“The American Pledge of Allegiance does not say and justice for all who have the deepest pockets.” — Matt Nadaeu

So Monster, what poor little craft brewery are you going to attack next?

Deschutes for its Green Monster?

Brooklyn Brewing for its Monster Ale?

Terrapin for its Big Hoppy Monster?

Heck, a search on RATEBEER.COM for the keyword MONSTER reveals 56 beers. How many other craft breweries are gonna get slapped with a “Cease and Desist” from Monster, I wonder.

And if there are at least 56 beers that use the name Monster in some way shape or form, why did Hansen decide to prey on a limited-distribution/low-production craft brewery from a small town in Vermont? Why not attack one of the bigger craft breweries? I would just love to know the method in the madness behind this ludacris decision…

Something needs to be done. Monster needs to be stopped. My good friend and fellow beer blogger, PJ Hoberman, put it best:

“Help Matt stand up. Support Rock Art. Boycott Monster. Spread the word. Make sure the world knows how pissed off we are. And smash cans with bigger cans.” 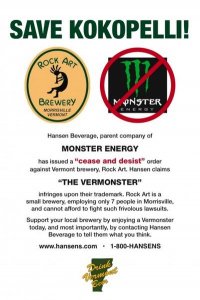