I hate to play favorites in the blogosphere. I would love to use the analogy of “Mama Wench” and say that picking a favorite blogger is like picking a favorite child — I love each and every one of them in their own special ways. But that just sounds creepy. Especially since 1. I am younger than the majority of other bloggers and 2. I have an aversion to children and 3. I have been known to try to trade my uterus for a spare liver.

But I digress. The point is this: every beer blogger has his or her own craft beer personality and style of advocating craft beer. Each has their own goals and aspirations for their site. And whereas I respect and appreciate all my fellow bloggers, the human side of me cannot help but pick favorites, here and there, despite my wish to remain as neutral as possible. 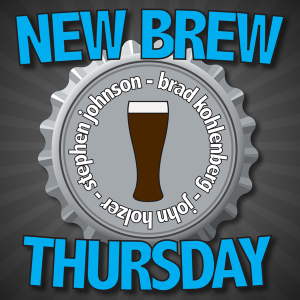 Case and point: New Brew Thursday. These guys are more than just hilarious and entertaining video beer bloggers. They are some of the biggest craft beer evangelists that I know and, more importantly, they are some of the best friends I have ever had. And we are talking about true friends, not the kind that you party a lot with and then know nothing about — the kind that open their homes and hearts to you when you need it the most, even if it is the most inopportune moment for them.

A few weeks ago, New Brew Thursday hosted me at their studio, where we enjoyed lots of really amazing craft beers, amazing chicken curry, lots of laughs and talked about the awesomeness of Kern River Brewing and the Just Outstanding IPA. If you haven’t seen the video, it is definitely worth checking out. If you have seen the video, it is definitely worth watching again. And again. And again.

Special thanks to New Brew Thursday for being amazing friends, amazing craft beer advocates and amazing video professionals. I love you all

You are soooooooo GOOGLE!

This week everyone’s favorite Mutineer, The Beer Wench ( a.k.a Ashley Routson ), pays the studio a visit and it gets GOOGLE! We crack open a couple of bottles Kern River Brewing Companies Just Outstanding IPA and it lives up to the name. We also enjoy some mighty fine spicy Indian food made by our lovely producer Yvonne.

We crack wise about craft beer, tell a few inside jokes, and have a round about good time. You also get to see Stephen with a partial beard, no beard, and a full beard. Ahh the magic of video.

This weeks master pairing find Stephen back in Dr. Bill’s Kitchen for a lesson on lemons, and a delicious breakfast pairing.

Also this week, our craft beer advocate offers to buy you a beer!

4 thoughts on “The Beer Wench Featured on NEW BREW THURSDAY”