Home » About The Beer Wench » NEWS » Homebrewing On Campus: The Future of Craft Beer?

Right now, Rod Stewart’s voice is echoing in my brain:

“I wish that I knew what I know now, when I was younger.” 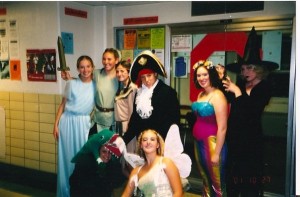 Not gonna lie, the closest I got to drinking craft beer in college was probably Guinness. Okay, that is a lie. My parents always had some sort of craft or imported beer in the house growing up, so I wasn’t completely unexposed. But like most poor college students, I always searched out the cheapest thrill and swill possible. Unfortunately, this usually meant Natty Light and buckets of the big bad corporate beers. Back then, beer was a means to an end. And that end was getting drunk. Yeah, you’ve all been there so don’t look at me like that.

I did not know one single person that homebrewed on campus. Which actually makes sense when you think about the “I want a golden egg and I want it now” instant gratification seeking Millennial Generation. We didn’t have time to wait 6 weeks for the beer to ferment. We wanted to get drunk NOW. My BFF Shana puts it best: “I don’t have all day to start feeling good here.”

Today’s college kids are a bit more savvy, though. Which sparks a little envy deep down inside me. If only I knew that I would eventually throw my two degrees out the door to pursue a career in the craft beer industry. Instead of hosting themed parties with Gatorade jugs filled with deadly (and disgusting) vodka concoctions, I could have hosted kick-ass homebrewing parties. Let’s face it, I would have been the coolest kid in school. Probably wouldn’t have graduated with honors, but it could have saved me 5 years of soul-searching.

Sara Wallace, Senior Writer at The Daily Princetonian, recently contacted me regarding my opinions about the recent trends towards homebrewing on campus for an article she released today. Naturally, I was more than happy to weigh-in on the topic.

I think it’s extremely important for young drinkers to develop an appreciation and respect for the art and craft of beer. Craft beer is more than just a mechanism for getting drunk. Sure, alcohol consumption does have a pleasantly euphoric side effect. But getting drunk should never be the primary reason behind drinking beer. Unfortunately, most college kids are mindlessly drinking whatever yellow fizzy beer they can find at the cheapest price instead of putting thought and consideration into where the beer came from, who made it, what ingredients went into it, and whether or not they actually like the stuff.

Beer is both a science and an art, which I think most educated persons can appreciate on some level, whether or not they drink. Brewing beer is like making food — there is a baking (scientific) component to it as well as a cooking (creative) aspect. I find that students get into homebrewing for all sorts of reasons outside of getting drunk. (Engineers like the science aspect, artists like the design component, etc.)

There are SEVERAL great resources about homebrewing on the Internet as well as many excellent books. Charlie Papazian’s “The New Complete Joy of Homebrewing” is a must-read book for all homebrewers. For the frugal, used copies of older versions are available and just as helpful. In regards to equipment, Northern Brewer is one of the best resources for supplies and ingredients. By far the best resource online is the American Homebrewers Association website. The AHA also releases a great magazine on news and trends in homebrewing called Zymurgy. And naturally, I always encourage following homebrewing blogs.

In my opinion, young (student) homebrewers will be responsible for shaping the future of the craft beer industry. They will be the driving force behind future innovation, inventing new tools and systems as well as pushing the boundaries of the industry. It is a really exciting time for craft beer!

What do you think?

8 thoughts on “Homebrewing On Campus: The Future of Craft Beer?”