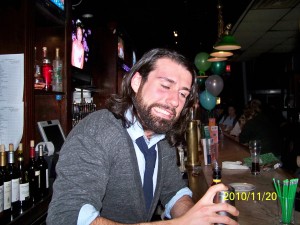 Ridgewood, New York, on the border of Brooklyn and Queens. Existed there until ten years of age, until my parents decided we should function as a family with a front lawn who gripe about increasing property taxes. That’s when we moved to Selden, on Long Island. I have resided in my suburban bedroom ever since.

NBA Live 95 and Mortal Kombat II for Genesis. But I basically just conversed with my friends in AOL Chat Rooms for the majority of my adolescence.

It was at this secret exclusive keg party some kids in high school had organized, to be hosted in the woods near the 7-11. I remember having about four plastic red cups of Bud Light, pissing on my friend’s lawn (but mostly on myself), and vomiting in my mother’s bathroom. Two out of those three occurred last week, as well, actually.

I attended SUNY Cortland. It’s in Upstate, New York, near Syracuse and Ithaca and some cows. Studied Kinesiology (Exercise Science) since I had become involved in fitness after an obese high school experience, and after I realized I had no desire to be a full-time journalist. My housemates and I liked to get drunk and violently toss our furniture down the staircase. 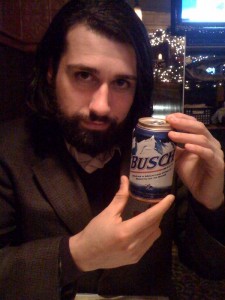 I think it was more of a natural progression for me, honestly. In four years, I went from double-fisting cans of Keystone in college to bicycling alone through hop fields in Watou, Belgium. Between those two periods, I just watched wrestling and performed a lot of incline push-ups at varying angles. The rest just happened.

2. Have you had additional craft beer epiphanies since the first? Detail as many of them as you wish:

Every craft beer consumed is an epiphany, and a learning experience, in my opinion. I’ve encountered a lot of amazing people within our scene, many of them I consider good friends. We all just like to make out with one another and have a swell time. 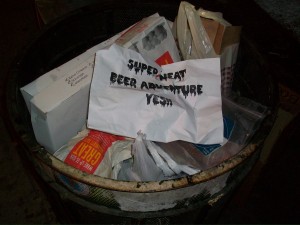 My situation is a bit unique since Super Neat Beer Adventure, Yes!! is contracted under a local arts magazine (Long Island Pulse) that reviews all posted content and such. I started a pub review and beer-related information column (The Red Zone) about three years ago (and still do) in their print edition, and they asked if I would be interested in a blog covering the same thing. During those three years, though, I witnessed Long Island craft explode and loved the camaraderie and good vibes from those involved, so it felt natural to dedicate all content on that, instead.

Super Neat Beer Adventure, Yes!! is the chronicle of my journey within our craft beer scene and my education in beer, period. I am not some expert dude on craft beer, nor do I pretend to be, so my entries don’t contain seven page critical analysis on why an IPA received 4.72/5 instead of 4.76/5 on my I AM A PRETENTIOUS AND ALL-KNOWING CRAFT BEER BLOGGER GRADE SCALE. Super Neat serves to promote and spread the word of Long Island craft beer, because I believe those involved deserve the exposure. As my smelly, eBay-purchased Sabu shirt reads, “‘Nuff said.”

Constant fun and expansion, basically. We have our own shirts (second design is coming soon), a home video series, and other random stuff I like to mess around with. I want to keep it dorky as possible, while slowly seizing control of some small European countries.

Eisenhower presented me with a Purple Heart, which was rather thoughtful.

I only utilize the internet for tweeting and subsequently #winning. 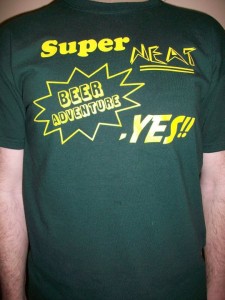 3. Are you a homebrewer? If yes, what is the most unique and interesting beer recipes you’ve brewed as a homebrewer?

I’m friends with a dope group of homebrewers (Long Island Beer & Malt Enthusiasts; http://malt.donavanhall.net), and I help them on brew days when I have off from work, but I have yet to homebrew alone. I did collaborate with my friend Todd on a peanut butter and jelly beer, though. We called it Peanut Butt-Head and, uh huh huh, Beavis, too.

4. What is your favorite beer and food pairing? 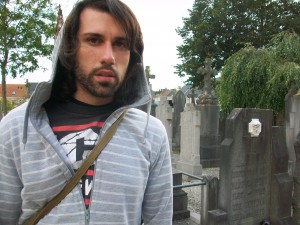 Personal Trainer in Manhattan. I am the craft beer version of “Jersey Shore” (see: bicep curls and brews).

I would probably be publishing fiction on a regular basis, looking like Duane Allman or Morrison like I was them, just sailing.

I just started an internship at a screen printing studio in Brooklyn, actually, because I wanted to learn how to make shirts. My main interest is in short stories, though. That, drawing, contemplating our bleak existence, etc. 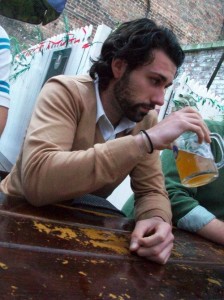 I would brew the “The Beer Wench” with women are composed of: jealousy, deceit, and sugar-coated sprinkles that multiply and suck your essence until you’re left with two children and a mortgage. Kidding. Love the bitches.

Dinosaur transformation (“dino-mation,” for short) and the ability to not hate everyone except my dog.

SPECIAL THANKS TO NIKO FOR AN AWESOME INTERVIEW!

CHECK OUT HIS FIRST EPISODE HERE: