Persistence definitely pays off, especially with my awesome boss Dan Del Grande, brewmaster and owner of Bison Brewing. After a few months of incessant begging, followed by several weeks of research and development, I am excited to announce the release of “Saison de Wench” — the first beer, of hopefully many, that I helped design and brew at Bison Brewing. So without any further ado… allow me to present the official press release:

July, 13 2011 -Berkeley, CA – Bison Brewing is excited to announce the newest release in its draft only “Beer of the Month” series, Saison de Wench.

Brewed in honor of her birthday, Saison de Wench is the first recipe that Bison Brewing’s Ashley Routson (also known as The Beer Wench) had a hand in developing, from start to finish. Starting with Dan Del Grande’s gold-medal winning Farmhouse Ale recipe as a base, the Saison de Wench recipe was inspired by spring flowers, rainbows and unicorns – But more importantly, using botanicals in the brewing process.

Brewed with a classic blend of specialty malts and wheat, Saison de Wench is an unfiltered, slight hazy, medium-bodied ale with a notably floral aroma and herbaceous flavor from the addition of herbs, flowers and spices. 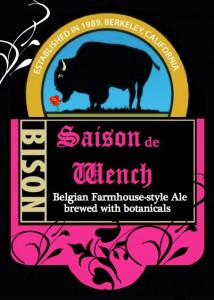 Rose, the flower of June, served as the main focus of the recipe, with over 10 pounds of dried organic roses used in several stages of the brewing process. Floral aromatics were enhanced with the addition of hibiscus, which also gave the beer its pinkish hue and slightly tart flavor. To further increase tartness with a zesty lemon flavor, lemongrass was incorporated into the recipe. Last but not least, in order to enhance the spicy phenols from the yeast, Saison de Wench was spiced with pink peppercorns, a spice made from dried berries that yield pepper-like characteristics.

As with all of Bison Brewing’s “Beer of the Month” release, Saison de Wench is extremely limited and only available on draft. It is recommended that orders be placed as soon as possible. For all press inqueries and orders, please contact [email protected].