Frankly, I don’t even know where to begin.

Two weeks ago, Molson Coors announced the release of a new line of beers specifically targeted towards women — a concept that not only angers and disgusts me, but is downright offensive.

I first got wind of the rumored “clear beer” last year, and most definitely aired my grievances then (read: BEER WARS: The Female Edition). But I had not heard anything more on the subject until recently. And as if clear beer wasn’t bad enough… Molson Coors also announced the launch of both a pink and yellow hued beer enhanced with what I assume is artificial flavoring.

Thankfully, this abomination of a product is only being released in the U.K. Those poor Brits…

According to research done by the marketing lackeys of Molson Coors, only 17% of women in the UK drink beer (as compared to 25% in the U.S.). Honestly, I don’t know much about the U.K. craft beer scene, aside from what Melissa Cole and Mark Dredge have told me. But something tells me that the lack of women drinking beer is a deeper issue than Molson Coors is willing to admit.

Perhaps the reason why more women drink beer in the U.S. is because our craft beer industry is twice, maybe 3 times larger and more extensive than the U.K.’s. Per capita, the U.S. has more craft breweries. And craft breweries make up a much larger percentage (albeit an extremely small percentage) of overall market share in the U.S.

So what does this mean? It means the average U.K. citizen is not exposed or does not have access to as much delicious flavorful beer as the U.S. Don’t get me wrong, the U.K. boasts a lot of really amazing and talented craft breweries. But from what I understand, corporate beer dominates the market place. And let’s face it, if my options were limited to corporate swill, I probably wouldn’t drink beer either.

Using probability theory and sheer common sense, one might be able to logically deduce a correlation between the fact that the U.S. has a larger craft beer market and a higher percentage of women beer drinkers. My theory is that, despite what Molson Coors research has concluded, women in fact prefer more flavorful, artisan-crafted beverages. This is also because I also believe that women, on average, have better palates than men. But, don’t just take my word for it… 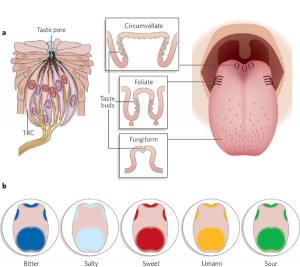 According to research done at Yale University in the early 90’s, women, on average, possess more tastebuds than men. Linda Bartoshuk, professor of otolaryngology and psychology at Yale, is one of the leading scientists researching genetic variation in the ability to taste. She is the very scientist that coined the term “super taster,” which refers to those born with extra taste receptors. According to her research, 25% of the population are supertasters, 25% are nontasters and 50% are tasters. For American Caucasians, about 35% of women and only 15% of men are supertasters.

And the buck doesn’t stop at tasting. Marcia Pelchat, a sensory psychologist specializing in food and beverage selections at the Monell Chemical Senses Center, has been credited with concluding that, on average, women have a better sense of smell than men. And according to Marcia, both taste and smell contribute to the perception of flavor, which gives a stronger argument in favor of women being better tasters than men.

And researchers aren’t the only people acknowledging this fact. Even the big beer guys are catching on…

Last year, SABMiller announced that 30% of its 1,000 advanced-level tasters are female — a number that has roughly quadrupled in 10 years. Interestingly enough, SABMiller says its empirical evidence shows that females are the superior sex when it comes to detecting such undesirable chemicals such as 3-methyl-2-butene-1-thiol (which is responsible for skunk flavors in beer).

So hypothetically, if women are more sensitive to smell and better tasters than men, doesn’t it seem like they would desire more aromatics and flavor in beer? And conversely, if they are, in fact, more sensitive to smell and taste, they would be more capable of detecting off-flavors and flaws in beer, which means they have a higher chance of being turned off from beers (like adjunct lagers) that are characteristically flawed. Right?

As for the new Molson Coors product, let us discuss just how asinine and horrendous it truly is… 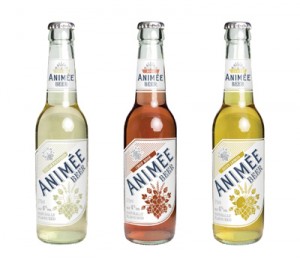 “The 4% ABV beer is lightly sparkling and finely filtered with a delicious, fresh taste. Animée will be available in three variants: clear filtered , crisp rosé and zesty lemon.” Let us get this straight. Molson Coors is blatantly implying that women have inferior palates. Wow. What a fucking smack in the face.

Not only did Molson Coors completely remove any sort of semblance of beer from the product, they also felt the need to spike it with artificial flavors and colors. It truly makes me want to scream and cry at the same time. This must be some sick and cruel joke.

And to add insult to injury. The rose flavor is fucking pink. I fucking hate pink. And when I saw the label with the pink hops, I threw up in my mouth. Twice. 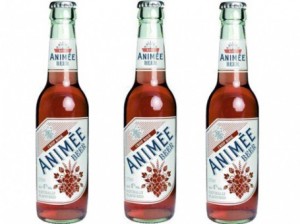 Let us review what we have learned today: Molson Coors did some research and found that only 17% of women in the U.K. drink beer. Yale research says that women are more likely to be supertasters. Research also shows that women possess a more sensitive sense of smell. SABMiller is continuing to hire more women tasters because they acknowledge the aforementioned. Yet, Molson Coors thinks that instead of creating a more flavorful and aromatic beer to attract more women, the best plan was to completely strip beer of all of its wonderful qualities and add even more adjuncts and artificiality.

As much as I would love to speak on the behalf of all women out there, I can only speak for myself. Personally, I was very much NOT a beer drinker until I discovered craft beer. When I wanted to get drunk in college, I usually opted for disgusting mixed drinks and boxed wine over yellow fizzy mass-produced beer. It wasn’t until I started to study for sommelier certification when I was 22 that I really began to respect an appreciate the complexities and nuances in alcohol. But it wasn’t until I was exposed to the amazing world of craft beer, that I became a craft beer drinker. And now look at me….

In conclusion, being both a soapbox craft beer evangelist and feminist, there is no way in hell that I will advocate or support this product. In fact, I hope that the concept fails miserably and that Molson Coors loses big money in the process. And while I watch them crash and burn, I will raise a pint of craft beer in the mist of their ashes and declare with conviction… “I AM A CRAFT BEER DRINKER”.

For more information on this subject, check out Melissa Cole’s take on Animee.