AUTHOR OF: Building International Coalitions Through Beer and Pavement 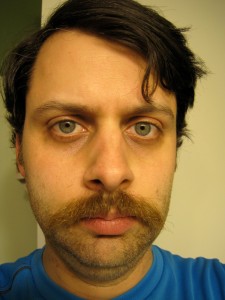 1. Where did you grow up?
I was born at the highest point in Ohio, Bellefontaine. I grew up in a small, dry town a few miles south of there by the name of West Liberty. We were located an hour north of Dayton and an hour west of Columbus.

2. What sports if any did you play growing up, through college and beyond?
I played everything growing up, but I lettered in football, basketball, and track. I played one year of college football (Div. III), but found it got in the way of my studies, beer, girls, and rock shows – not exactly in that order.

4. If you can recall, what is the story of your first beer? Where did you have it? What style and brand was it?
My first beer was the first summer I worked for a YMCA camp. One of the directors opened his house for a little party on our 24 hours off. I don’t remember exactly, but I made a point of only drinking beers with the word “premium” or “dry” on their labels. All were industrialized, rice-adjunct lagers. So, nothing special, but I was trying. It was to impress a girl, but it didn’t work.

5. Where, if applicable, did you go to college? What did you study? What additional activities, organizations, sports did you partake in during college?
I attended Capital Universtiy in Bexley, OH (suburb of Columbus). I studies elementary education. Football (one year), University Programming, and Orientation Assistant were activities in which I participated. I later earned a MA at The Ohio State University, also in education. 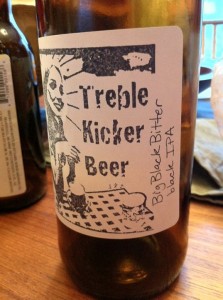 1. What was your first craft beer epiphany? Recall as many details about it as you can:
I had dabbled in craft beers for a while (Pete’s, Sam Adams, Columbus Brewing Co., etc.) without really knowing what I was choosing. Then, one night I strolled down to this beer shop on the corner and walked out with two bombers of Stone Ruination. My taste buds were never the same. From then on, I looked and searched for that same experience of getting punched in the face with hops and a beer experience that rendered my taste buds useless for the remainder of an evening.

2. Have you have additional craft beer epiphanies since the first? Detail as many of them as you wish:
There have been many. I’ve traveled to Seattle on several occasions and have come back more and more knowledgeable about beer. We started a beer club here in Columbia. Our first tasting included somewhere near 30 different beers – 90% of those were completely new to me. Then, there was homebrewing. On my second batch, I brewed a single-hopped IPA with Simcoe and realized that I could brew a beer as good as or better than most professionally-brewed beer. Then, there are the moments that happen almost every day as I try one new beer after another. It’s never-ending. 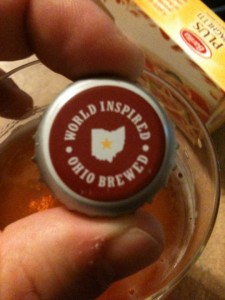 1. How long have you been writing your beer blog?
About 18-19 months, but I’ve been blogging for much longer.

2. What inspired you to start writing your blog?
I had this blog that had run its course and had others in the wings. One blog dissected Pavement lyrics and another reviewed beer. Someone somewhere suggested that I write a manuscript and title it “Building International Coalitions Through Beer and Pavement.” The rest was history.

3. Why did you choose the name of your blog?
As I said before, it was suggested, but it perfectly encapsulates what the blog is about. I’m all about promoting the things I love to the masses. Through exploring intersections between these interests, I hope to turn a few people on to craft beer and indie rock.

4. What are you personal goals for your blog? What do you hope to achieve with it?
I’d like to eventually move to my own domain, but I’m too lazy. Id also like to see a steadier amount of traffic so that I can justify such a move. Then, I’d like for it to be self-sufficient. Eventually, I think there’s a book in all of this, but I’ll have to somehow tie a lot of loose ends before that happens. 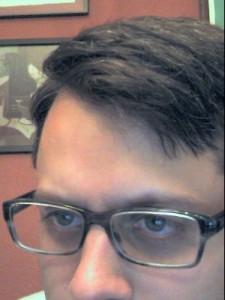 1. What are your top 3 favorite beer styles?
IPA/DIPA, Imperial Stouts, and Sours…Does it get any more cliched than that?

2. What are your top 3 favorite breweries?
Mikkeller, Stone, and Founders

3. If you could work with or for any one brewery, which one would it be and why?
There are a couple that come to mind. I recently met Brian of Stillwater by chance in a bar in DC. He was pretty cool and liked to talk music. I’d totally work for him. The other would be these friends I have here who are trying to start a nano-brewery. They keep talking about asking me to blog their exploits in exchange for beer, but it hasn’t happened yet.

4. Are you a homebrewer? If yes, what is the most unique and interesting beer recipes you’ve brewed as a homebrewer?
Yes. I rarely do your run-of-the-mill brews, but I do popular styles for the most part. There was the Wowee Zowee, as huge DIPA (9% ABV) named after the Pavement album that was super sticky and dank as hell. It looked like I swirled corn starch in my glass it was so sticky. Then, there’s the New Slang Saison I brewed this summer with lemon zest, Sorachi Ace, and rosemary. Currently, I have an imperial stout in secondary sitting on wood chips, cocoa nibs, and vanilla beans, all soaked in the same bourbon. As a bonus, that bourbon turned out to be a beautifully chocolate/vanilla sipper. We’re thinking of using it for a dessert sauce at some point.

5. Do you have any beer certifications (BJCP, Cicerone, Siebel, American Brewers Guild)?? If so, what are they?
Nope, I’m just a gentleman dabbler.

6. What is your favorite beer and food pairing?
We smoke a turkey every year for Thanksgiving. I love to eat that bird with St. Bernardus Abt 12. 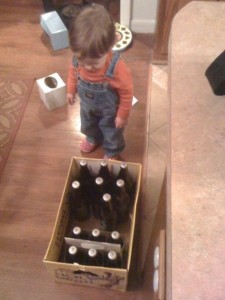 1. What is your current day job?
I’m an instructional specialist for a non-profit organization that provided professional development for teachers in technology and inquiry-based instructional practices. I’m also proof that Obama’s stimulus package saved jobs.

2. If you could change your career at this very moment, without any restrictions on what you could do, what would you want to do and why?
Without restrictions? I’d write. Otherwise, I’m looking into what it would take to own my own business. I’m thinking of starting a beer shop with some home brew supply as well as a couple of taps for imbibing while you shop.

3. Are you married? Children?
I am married and we have a daughter who will be three on September 11th.

4. Outside of beer and writing, what are some of your other hobbies?
I buy my weight in records every month and go to as many shows as work and fatherhood allow. I am also a lifelong fan of Ohio State football.

1. If you were a style of beer, what style would be an why?
Sour. I might make you wince or pucker upon our first encounter, but you’ll soon realize that I’m complex. You’ll either like me or you won’t and that’s okay.

2. You were caught smuggling beer illegally, which has now been made punishable by death. Right before you are sent to the executioner, you are offered one last beer. What beer would you chose and why?
I’d wait for a minikeg of Hopslam. That beer is so light, sweet, bitter, and perfect. That and it only comes out once a year. My execution might have to wait until they can round some up for me. That and I would be so shnockered after a whole minikeg I wouldn’t even notice the execution.

3. If I contracted you to brew a beer (or design a beer recipe) called “The Beer Wench” — what style would you chose and what, if any, extra ingredients would you add?
For the originator of IPA Day? I’d brew a big-ass Imperial IPA, of course. The hop profile would be carefully selected so as to feature tons of citrus and fruit on top and loads of bitter beneath. Id also go for a crystal-clear appearance and sharp flavor profile so that it would pair well with foods and look more at home on the table than any glass of wine. Of course, we’d have to change the malt bill and specialty grains every year to get the color to match your always-changing hair color. I’m not sure how we would achieve purple, though.

4. If you could be a superhero, what would you want your superpowers to be?
I would want two hollow legs so that I could drink every brewery dry. However, I’m not sure how that would make me a hero in anyone else’s eyes but my own.

5. What is one of the craziest things you have ever done and lived to tell the story?
I’ve lived a pretty boring life so far. The craziest thing I’ve ever done is probably either something I did after a few too many and promptly forgot or something else I’ve blocked from my memory. Getting licked once by New Bomb Turks frontman Eric Davidson was pretty wild, but I don’t know that it was all that life-threatening.

6. What are your thoughts on bacon?
Is it possible to make love to a pork product? Last Thanksgiving, I had some leftover dark chocolate from making Buckeyes (peanut butter balls dipped in chocolate) and there was bacon in the fridge. So, we did the only logical thing and dipped those mothers. Words cannot even attempt to describe the ecstasy I felt that day. My wife recently took a charcuterie class and I’m hoping there will be a lot of homemade bacon in my future, especially after we get the half pig we recently purchased.

SPECIAL THANKS TO ZAC FOR AN AWESOME INTERVIEW!