According to its publisher, The Oxford Companion to Beer is the first major reference work to investigate the history and vast scope of beer. The 960 page book features more than 1,100 entries written by 166 of the world’s most prominent beer experts. 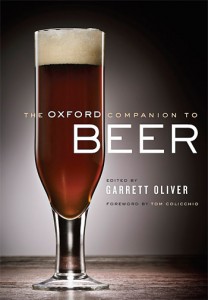 As you can imagine, writing such an all-encompassing, comprehensive piece of work can be a daunting, if not impossible, challenge. And sadly, because its bold assertions come with high expectations, the book has been receiving quite a bit of criticism, even being called a disaster.

When I was in college, I took two back to back Astronomy courses. In the first class, scientists discovered that Pluto had a moon. By the time I got to the second class, Pluto was no longer a planet. The moral of the story? Science isn’t perfect, history is objective, and humans make errors. People will find errors in this book, some will fight over facts, and there will be lots of opinions thrown around. However, it does not take away from the fact that this awesome book is an extremely valuable piece of work for our beer culture and society in general.

And for those of us who are technological inclined (read: dependent), Oxford University Press released a series of very short YouTube videos featuring Garrett Oliver, the primary author of the Oxford Companion to Beer, talking about some of the topics covered in the book. I found the videos quite perfect, short, sweet, to the point, with interesting and relevant content, leaving me craving more information and desiring to read the book to get more answers. And because I enjoyed the videos, I would like to share them with you all. If you have 10 minutes today, take the time to watch them. Cheers!

What is “Craft Beer”?

Favorite Quote: “But to your average person, craft beer is beer that is particularly tasty”

The Rebirth of Beer Diversity

Favorite Quote: “What craft brewing really is is the rebirth of the diversity of beer.”

Inside the “Oxford Companion to Beer”

Favorite Quote: “Craft beer is not really in some ways a new thing, but it is an evolving thing and it really takes in the entire world.”

The Science of Brewing

Favorite Quote: “A lot of things that you see around you became popular and necessary industrially because brewers needed it.”

Brewing in the Middle East

Favorite Quote: “Even places that no longer brew beer, like say Saudi Arabia, there was back in ancient times a beer culture.”

Favorite Quote: “It tasted like a really beautiful old Madeira. It was really amazing.”

Why Beer is Better than Wine

Favorite Quote: “Beer has a much much wider range of flavor than wine does. In fact, it’s not even close. And the reason for this is actually quite simple. Brewing is a lot more closer to cooking than wine-making.”