Three breweries, three states, three beer cocktails. On February 25th, BREWPUBLIC is bringing together a trifecta of tristate craft breweries to perform the ultimate beer mixology hat-trick at The Guild Pub in Portland, OR.

“The Guild has been interested in doing beer cocktails for some time and is excited to partner with three innovative craft breweries, Portland’s number one source for beer news, and the country’s premier beer mixologist for the first of many beer cocktail events to come.”  – Dan Roy, owner of The Guild Pub.

For four straight hours, The Guild Pub will feature a menu of original beer cocktails designed by each of the breweries with the help of BeerMixology.com’s founder, Ashley “Beer Wench” Routson. In addition to the cocktails designed by each brewery, there will be a special “his & her” beer cocktail collaborated on by beer blogging duo, Angelo De Ieso and Ashley Routson. Sample pours of each beer will be available for the inquisitive minds craving a side by side analysis. Brewmasters from each brewery will also be in house, making the menage-a-trois of beer love an even more intimate experience. 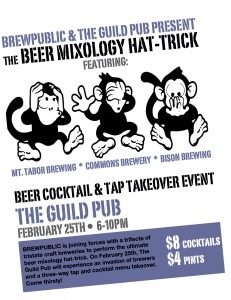 One thought on “BREWPUBLIC & The Guild Pub Present: The Beer Mixology Hat-Trick”