I apologize to all the Jersey Shore and Housewives fans, but I lack interest in just about every single reality show produced these days. In fact, the only ones that I pay moderate attention to are the food competitions, and even that is few and far between (too much drama). Well, that was until now. Finally, there is a reality series that is both interesting and relevant (to me, that is)… 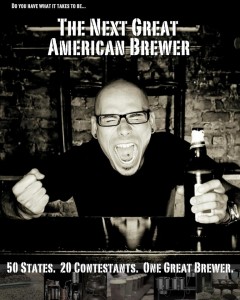 The Next Great American Brewer is a reality competition television series, produced by Main Gate Visuals (who have worked with the US Army, Top Chef and Project Runway — to name a few).

The show is bringing twenty of the best amateur and professional craft brewers across the United States to compete against each other in challenges related to brewing beer and running a successful brewing company. The winner of the competition will have their beer brewed, bottled and distributed by Goose Island Brewing Company across the country.

But don’t let the show’s title fool you, it isn’t all about brewing. Although beer design and brewing skills are critical components to the show, the brewers will also be challenged on their ability to conceptualize packaging, market and sell beer, serve beer in a busy brewpub environment, cook with beer, pair food with beer, and troubleshoot all sorts of operational problems. For more information, check out the official trailer here.

Although the rockstar team of judges might not be as harsh and dramatic as Gordon Ramsey, they are promising to put a no-holds-barred smack-down on the contestants. As someone who has worked every angle of the industry — from shoveling spent grain and cleaning kegs, to package design, to marketing and sales, to working in kitchens and serving behind busy bars — I cannot wait to see how the contestants handle it. And as a huge evangelist and advocate for craft beer, I just really excited for craft beer to get the mainstream attention it deserves!

Hopefully, there will be a Season 2. Because y’all know I’m itching to audition!!

17 thoughts on “The Next Great American Brewer: A New Reality Series”