After a two-year hiatus, the rockstar brewers at Dogfish Head, Victory and Stone have re-joined forces to re-release their popular collaboration beer, Saison du BUFF — a Belgian-farmhouse style brewed with parsley, sage, rosemary, and thyme.

Dogfish Head / Victory / Stone Saison du BUFF was born out of an ad hoc group formed way back in 2003. Sam Calagione (Dogfish Head), Bill Covaleski (Victory), and Greg Koch (Stone) got together to drum up some press for the little guys in the craft brewing world.

“We called it BUFF, an acronym for Brewers United for Freedom of Flavor,” explains Greg Koch, CEO Stone Brewing Co. “We wanted to protest the flavorless, mass-produced, fizzy yellow lagers that dominated the marketplace, and we thought if these three brewers from different parts of the country banded together, we could really get the media to notice the incredible revolution that was going on in the craft beer world.” 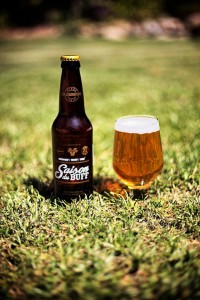 Just like the last time, each brewery will brew variations on the same beer, using the same base recipe with the same herb blend, with slight recipe tweeks distinctive to each brewery. Stone’s will be the last version to be released and will feature herbs organically grown around the brewery and from nearby Stone Farms.

FYI: this refreshing, herbaceous, and peppery meeting of the minds is here just in time for the hot summer, but it won’t last very long — so once you see in on the shelves, make sure to grab it cause who knows how long it will be out there.

For more information on the collaboration, check out the video here: