If there is one thing the world definitely needs, it is more smoked beers. Especially during BBQ season. And Stone has graciously answered this call by releasing special variations of its ever-popular Smoked Porter. A limited number of 12 oz. bottles of Stone Smoked Porter w/ Vanilla Bean and Stone Smoked Porter w/ Chipotle Peppers are making their way to select markets beginning on June 18.

“Stone Smoked Porter is one of the unsung champions of our lineup,” asserts Greg Koch, CEO & Co-Founder of Stone Brewing Co. “It vies for the title of “most food-friendly” of our beers, and the breadth of its ability becomes even more evident in these two delicious variants.”

Stone Smoked Porter w/ Vanilla Bean was first brewed in late 2006 as the brainchild of Stone Brewing Co.’s Small Batch Brewer, Laura Ulrich. Inspired by having Stone Smoked Porter poured over a scoop of vanilla ice cream, she had a stroke of brilliance and history was made.

Stone Smoked Porter w/ Chipotle Peppers was conceived in May 2006 as an idea from Merchandise Manager Chris Carroll, who proposed making a spicy one-off beer as a special Cinco de Mayo growler fill. Originally dubbed “South of the Border Stone Smoked Porter,” the resulting beer was an incredible interplay of roast, smoke, and a touch of heat, and has remained a popular, albeit rare, treat ever since.

“For now, these are one-time bottlings,” continues Koch, “but we reserve the right to change our mind about that at any time.” Fans are invited to share their thoughts on each version here. 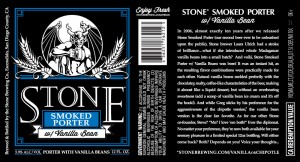