Home » About The Beer Wench » EDUCATION » An Ode to Orval

If you’ve never had Orval, you can’t call yourself a true beer geek.

Okay, okay. All snobbery aside, it’s no secret that Orval is one of my favorite beers in the world. And it has been since the first time I took a sip of it on May 31st 2008. Yes, that’s right. I remember the exact date I tried my first Orval, and how could I not? 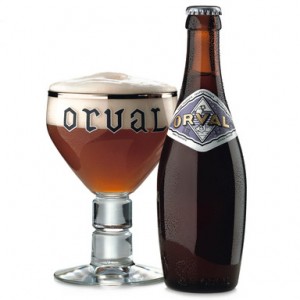 Orval is an extremely intriguing beer. It is the one Trappist beer to get dry-hopped and it is the only Trappist beer to get spiked with Brettanomyces upon bottling. As a result of being bottle-conditioned with wild yeast, Orval is constantly evolving inside of the bottle. No two bottles of Orval are the same.

If you drink Orval fresh, it tastes very similar to an English Pale Ale–spicy, floral, slightly bitter and very dry. But if you taste it after the 5 month mark, you will find yourself drinking an entirely different beer. And the more age it has, the more unique it becomes. 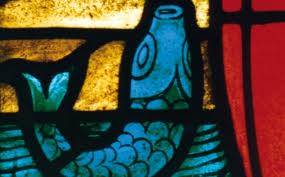 As if the beer wasn’t cool enough itself, the story of Orval’s creation is equally intriguing. According to legend, Countess Matilda of Tuscany (an Italian noblewoman remembered for her military accomplishments) was passing through this region in about 1070 with her retinue. She stopped at a clear spring and trailed her hand in the water – and her wedding ring, a gift of her recently-deceased husband, slipped off her finger and sank. Distraught, she knelt and prayed fervently for its return . . . and a trout swam to the surface with the ring in its mouth, returning it to her. She is said to have claimed “Truly, this is a golden valley!” (French: Or = gold; val = valley) She gave the land to the church, and the trout with the gold ring can be seen to this day in the Orval logo. (Source: Merchant Du Vin)

Abbaye Notre-Dame d’Orval is a Cistercian monastery situated near Florenville, in the province of Luxembourg, really close to the French border. As is customary with Cistercians, the Community of Orval provides entirely for itself through its own activities (mainly cheese-making, hospitality, and beer brewing). All generated profits are devoted both to various forms of social and charitable aids, and to the upkeep of the monastery. 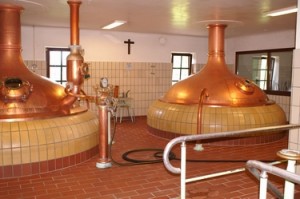 Throughout the long history of Orval, it is assumed that there has always been a brewery on the grounds. Various facts corroborate this idea. There have been topographical references on old drawings. There was also a detailed description of production left by a Franciscan visitor three hundred years ago. And an area called the “hop-field” was located very close to the monastery. (Source: Orval)

The present day brewery was built in 1931 with intentions of creating a new source of funds for the monastery’s reconstruction. The brewery was designed by Henry Vaes, who is also responsible for designing the iconic Orval beer glass. Orval was the first Trappist beer to be sold nationally around Belgium.

“The present Abbey, officially called Notre Dame d’Orval, stands alongside the ruins of the old. Bread and cheese are made for sale, as well as a startlingly dry, hoppy, ale of approximately 6.2 abv, with an dark orange colour. This world-classic brew gains some of its astonishing complexity from a secondary fermentation with multiple strains of yeast, including “semi-wild” Brettanomyces which imparts a “hop-sack” or “horse-blanket” character. Devotees like to bottle-age this beer for between six months and three years. It is a powerful aperitif.” — Michael Jackson, The Beer Hunter.

Taste: Well-balanced ale! The ale has an interesting acidic “bite” that is nicely neutralized by a mild malt and mild yeast taste. The floral hops are apparent on the taste and help balance out the sweetness of the malt as well as kill some of the acidity. The finish is tart and slightly bitter, lingering … enough. Medium to full body. Nicely carbonated. Alcohol is very hard to detect on the taste, which makes it a super easy ale to drink.

Overall: As always, ORVAL is a classic. This is a MUST TRY BEFORE YOU DIE kind of beer. I don’t care who you are and if you don’t like beer – you must try Orval at least once in your lifetime.

Orval is a staple in my beer diet.

Why? Because it could very well be the quintessential example of what a well-balanced, well-rounded ale should look, smell, feel and taste like. It reminds me of Goldie Locks and The Three Bears. Not too strong. Not too weak. Not too sweet, not too bitter, not too sour, not too astringent -EVERYTHING IN BALANCE.

How to Find Orval

Merchant Du Vin is the sole importer of Orval. For a list of their distributors, visit: http://www.merchantduvin.com/distributors-resellers.html

To learn how Orval beer is made, visit this link.

And if you really want to see me embarrass myself, watch this vertical tasting video of me filmed roughly three years ago…… (be warned, I was a newbie back then).

4 thoughts on “An Ode to Orval”