Recently, I was given a rare opportunity to taste a vertical of ORVAL vintages.

The 7 year Orval was probably the “oldest” beer that I’ve tasted. I found it rather amusing to drink a beer that was made before I was of legal drinking age. 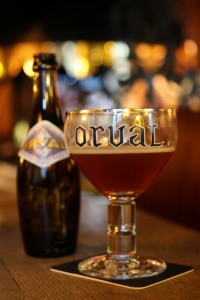 Orval is arguably the most unique of all the Trappist beers. Brasserie d’Orval brews just one beer — Orval. Orval is its own unique style. It is not a Trippel or a Dubbel or a Saison or a Lambic. Orval is Orval. However, Orval itself comes in many different forms. As Orval ages, its characteristics change dramatically — a result of being inoculated with Brett. 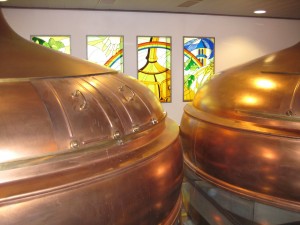 Many beers change with age, but none change quite like Orval. Young Orvals are characterized by a fresh hop bouquet, fruity esters and a pronounced bitterness. After 9 months, Orval undergoes a complete change. The once fresh hop bouquet turns into an old-fashioned hop aroma and the pronounced bitterness fades as caramel malt flavors become more prominent. Although “Brett” may start to show signs prior to the 9 month landmark, it really starts to shine through 9 months after bottling.

The Orval recipe is very similar to an English IPA.  Three different malts, two types of hops, Belgian candied sugar, complex fermentation with multiple yeasts, dry-hopping and bottle conditioning all contibute to its great character and complexity. (In addition to using Brett, Orval is also the only Trappist brewery that dry hops).

For me, being able to taste a vertical of three different vintages of Orval was an amazing and rather eye-opening experience. My video does not give it any justice. Either way, I hope that you can find some value in it! Cheers!